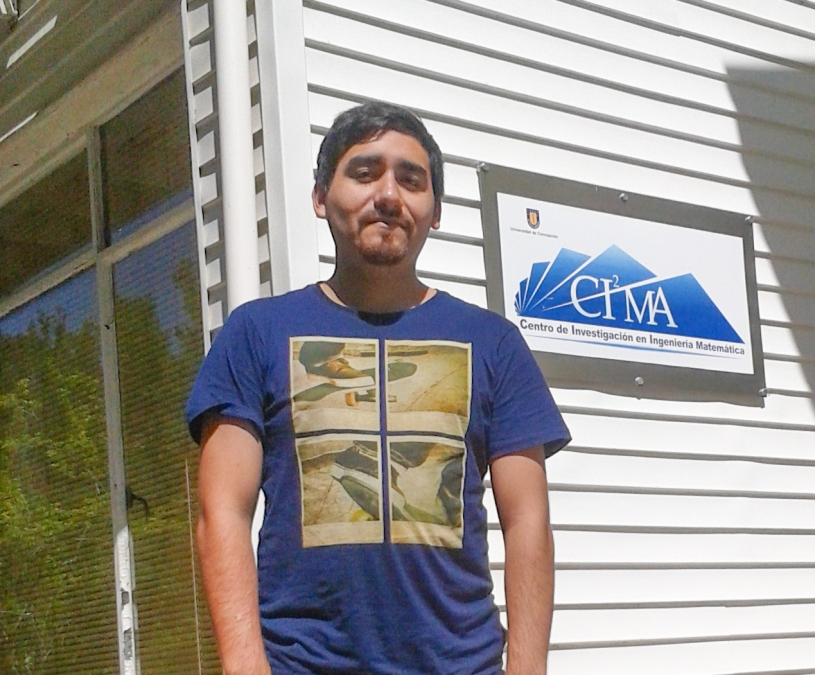 Julio Careaga Solís recently obtained the professional title of Mathematical Civil Engineer of the University of Concepción after presenting the results obtained in his study "Mathematical modeling and numerical simulation of sedimenters with variable area in wastewater treatment plants (PTAS)", supported by The project Fondecyt 1130154 of CONICYT, carried out at the echelon of the Center for Research in Mathematical Engineering, CI²MA, and for which it obtained the highest mark.

The research is related to an important stage of the so-called "activated sludge process", that is, the treatment of wastewater by mixing with microorganisms, in a reactor and later recovery of a clarified drainage in a settler. The modeling, design and control of reactors and settlers give rise to nonlinear mathematical models. The analysis and numerical solution of these models requires specialized mathematical knowledge, which is being developed by a group of researchers from CI²MA and also from the Centro de Recursos Hídricos para la Agricultura y la Minería (CRHIAM), both from the UdeC. Careaga's work is the result of his immersion in this line of research.

"In the investigation, we present the comparison of two numerical methods for the resolution of a non-reactive sedimentation problem for wastewater treatment plants (PTAS) with variable cross-sectional area. The comparison is motivated by the difference in efficiency of both methods. Simulations are presented for tanks with different types of geometry and the approximate solutions obtained by both methods are compared, and a study is also made of their convergence. In addition, a reduced model is presented for the batch reactive sedimentation process, and a numerical method for the solution approach is shown, involving ingredients developed for the non-reactive case. Simulations obtained from the numerical method proposed under different initial conditions are presented; Kynch test, Diehl test and test of overcompressed sludge. And a brief comparison of the behavior of nitrate degradation is made for the simulations obtained from the Kynch test and the Diehl test, "said Careaga, who is waiting to apply for a doctorate at the University of Lund, Sweden, under the guidance of Professor Stefan Diehl. "That is the goal for now, to be able to work in the same area of ​​sedimentation, generating new lines from the conclusions of the investigation, looking for extensions that allow comparing the method with others, in 2D or 3D", explains the new engineer.

Dr. Raimund Bürger, professor of his research, emphasized the investigative capacity of Careaga. "Julio collaborated with other CI²MA researchers, and was able to simulate scenarios, so it was very efficient. In addition, he proposed changes of parameters to our international partners. We hope that you can enter the doctorate, addressing the results of your research that, because they are completely original with respect to traditional methods, in our opinion, deserve to be published. In addition, the two models he approached can be combined, which would be a great contribution, from the point of view of the application, because, in the mathematical, the challenge lies in the development of efficient simulation methods", he emphasized sub-director of CI²MA.

Professor Stefan Diehl (Lund University) is a close and former collaborator of previous work by his colleague CI²MA, Raimund Bürger, on sedimentation problems. From the conclusions come many of the ideas that shaped the study that now headed Careaga. "His work contains project ideas from international scientists and his own. The quality of his work is outstanding and has an interesting international projection. I had the opportunity to work with him at a distance, and also personally, in the context of the recent international meeting WONAPDE 2016 (Fifth Chilean Workshop on Numerical Analysis of Partial Differential Equations, held at the UdeC from January 11 to 15), where Julio Successfully exposed its results to high level researchers from different countries. I hope to be able to collaborate with him more directly in the future, given the coincidence we have in topics of interest for research", explained the specialist.

Regarding the specific usefulness of the research results, Careaga emphasizes that "different scenarios can be simulated, with different feeding and discharge conditions, different values for extraction flows, since relevant data are obtained about the concentrations that are recorded in the sedimentation process. It can help companies working in this area to anticipate, act proactively in different scenarios, and evaluate in a timely manner the redesign of their treatment plants", said the engineer.

Figure 1:
Diagram or graphic description of the process of continuous sedimentation in a tank with cross-sectional area, variable with respect to depth. The following elements are detailed: 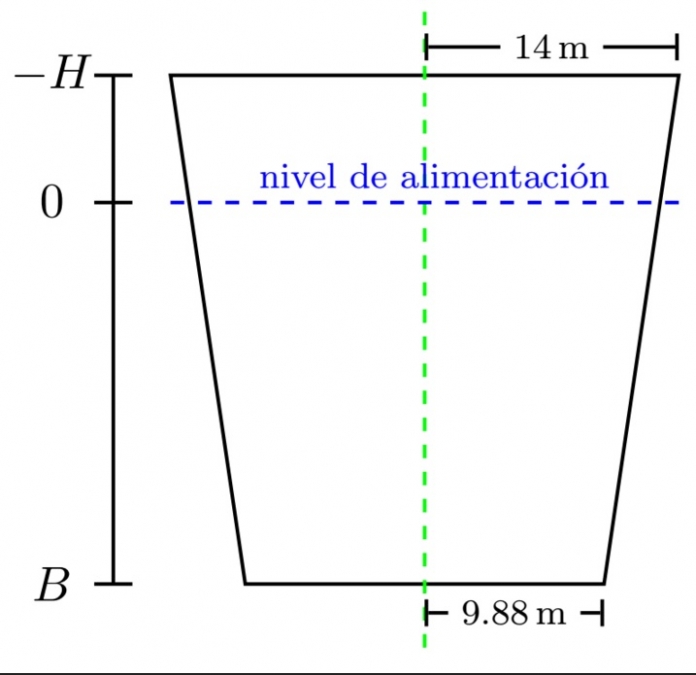 Figure 2:
Graphic representation of a vertical cross-section, of a tank with a truncated cone shape, convergent with respect to depth. Indicates: