9 November 2016: Indian postdoc closed stay with talk at the UBB
During one year, the researcher made a research visit in Chile

This Tuesday the Indian scientist Jhuma Sen Gupta gave a talk at the Bio-Bio University, in the context of a new version of the Seminar on Numerical Analysis and Mathematical Modeling, which are periodically organized by researchers from the Department of Mathematics of that university and the Center for Research in Mathematical Engineering, CI²MA, University of Concepción. 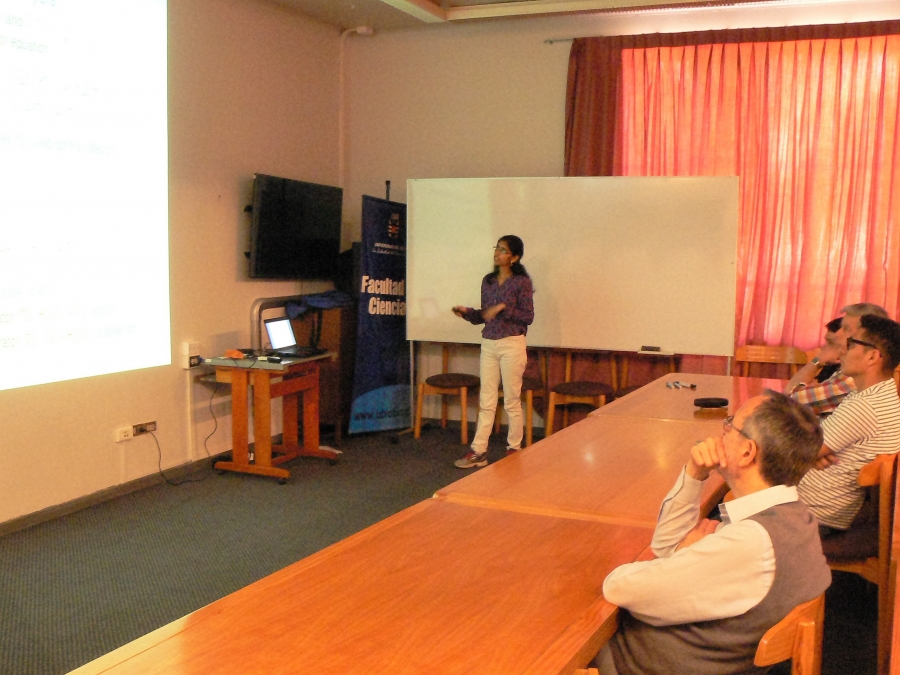 The exhibitor did her undergraduate studies in Mathematics at Karimganj College, and then obtained her Master's degree at Assam University, then pursued her doctorate at the Indian Institute of Technology Guwahati, all in her homeland. And for a year, he moved to our country to do a postdoctoral stay at the Pontifical Catholic University of Chile, under the supervision of researcher Norbert Heuer. This, thanks to funding from the Research Ring in Science and Technology ACT 1118: Research Ring in Numerical Analysis of Partial Differential Equations (ANANUM), from the Associative Research Program of CONICYT, which was led by the deputy director of CIAMMA Raimund Bürger.

"At first, it was a little difficult for me to be in Chile, but my advisor, Professor Heuer and my colleague Thomas Führer, always gave me a lot of support both academically and administratively and personally, considering that I did not say anything about Spanish on arrival. I made this stay of research to be able to collaborate with Professor Heuer, and that allowed me to advance in what I had already worked on in my doctoral thesis, related to the method of Galerkin, but now more focused on the variant known as the Petrov- Galerkin, which is a very important progress and useful for my research goals", Jhuma said of his stay that lasted from November 16, 2015 until next week. In addition to the Discontinuous Petrov-Galerkin Method, some of his research interests are Parabolic Problems Interface Problems, Finite Element Methods in general, and Post-Error Analysis.

In this lecture, one of the last activities to be carried out by Jhuma in the context of his postdoctoral stay in Chile, he approached methods for the discontinuous approximation of Petrov-Galerkin (DPG) finite elements for parabolic problems, starting with the basic theoretical framework for Them, with optimum test functions for the heat equation and highlighting some advantages of the method over the Galerkin standard. In addition, Jhuma explained some possible extensions of the results achieved in his research, for example, to treat more general linear parabolic problems, and exemplified the theoretical findings through some numerical results. In his plans for the future, Jhuma hopes to be able to return to Chile to continue his research in AN of EDPs, so he is waiting for the results of a Fondecyt competition he applied to finance a new stay, this time for two years .