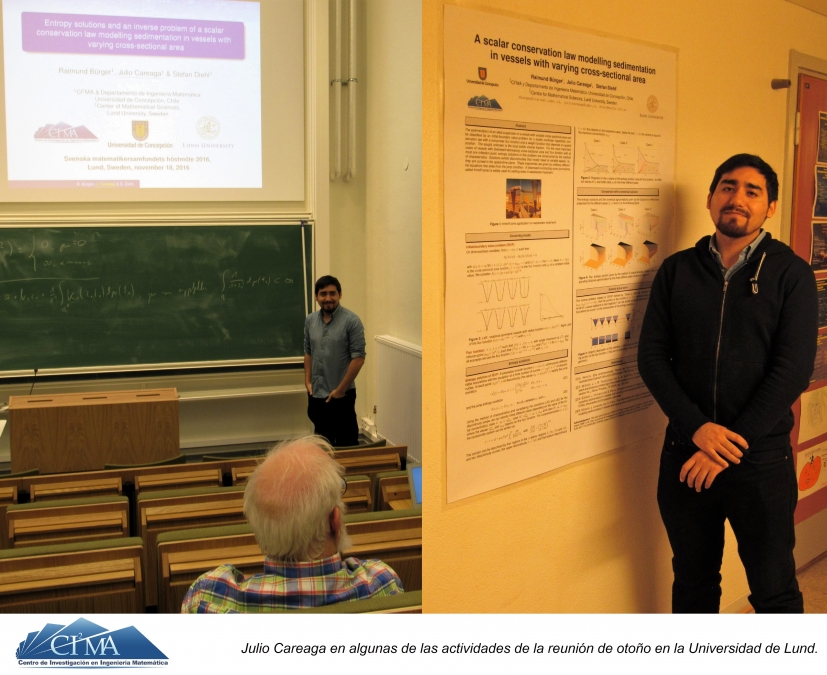 Between Sunday 13th and Saturday 19th November a new version of the autumn meeting or "Höstmötet 2016" of the Swedish Mathematical Society was held at the University of Lund (Sweden), where the Center's research assistant Of Research in Mathematical Engineering, CI²MA, of the University of Concepcion, Julio Careaga, who, for these days, makes his second stay in that Scandinavian university, was invited to give a talk, in which he presented some of the studies that he has done under The direction of the scholar of that house of studies, Stefan Diehl and the deputy director of CI²MA, Raimund Bürger.

"The contents presented at the congress were varied, there were topics related to nonlinear wave equations, a theoretical work related to stochastic processes to, for example, an application of numerical methods to model the growth of a cancerous tumor, in a total of Eight exhibitors, including me. In addition, the mathematical competences organized by the Swedish Mathematical Society were held the next day, which are of great importance here for both the academic community and the academic community in general, "explains Careaga.

The Swedish Mathematical Society (SMS), founded in 1950, is made up exclusively of professional mathematicians and seeks to develop cooperation between academics and professionals from other organizations, through the realization of various activities that point to that Direction, among which stands out the autumn meeting, in which Careaga presented. In his talk, called Entropy solutions and an inverse problem of a scalar conservation law modelling sedimentation in vessels with varying cross-sectional area, the Mathematical Engineer UdeC posed some mathematical solutions to problems of sedimentation in water containers with surfaces of variable cross-section. The objective of the study is to obtain algorithms that allow the modeling of the different sediment concentrations inside the containers, their relation to the time and the specific section of the vessel being studied, besides the influence of external factors such as Example, the force of gravity. The obtained solutions have diverse applications in the industrial area, especially in the mining and in the waste water treatment.

The U. de Lund has important historical prestige in the field of mathematics, and among its most prominent academics in the area are the renowned Lars Hörmander, who won the Fields Medal in 1962, the Hungarian Marcel Riesz, Who worked on summation methods, potential theory and other areas of analysis, and Lars Gårding, who also made important contributions in Partial Differential Equations, with Gårding's inequality being one of his best known results.

Careaga's stay in Lund is financed by funds from the joint baseline project of the CI²MA and the CMM of the U. of Chile, as well as contributions from the Swedish academic institution in relation to accommodation.