23 December 2016: UdeC exceeds 40 PhDs in Mathematical Engineering
The program has a recognized prestige at national and international level. 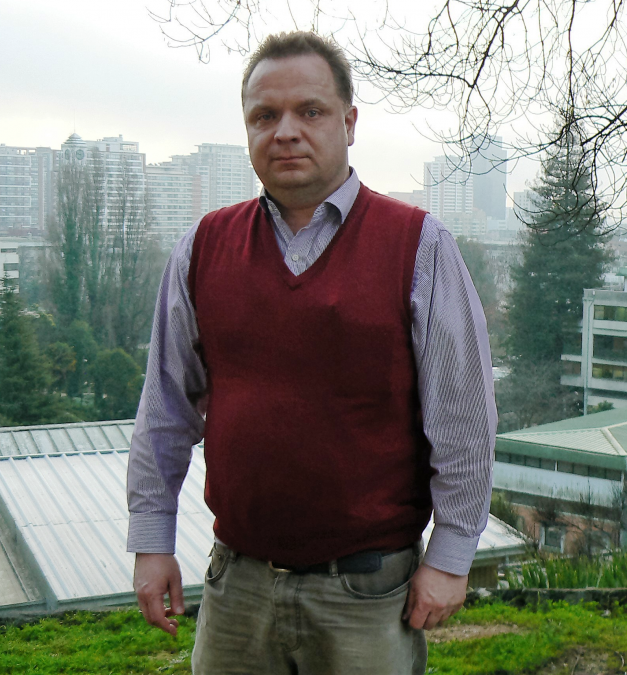 Recently, students of the PhD in Applied Sciences with mention in Mathematical Engineering, Universidad de Concepción , Costa Rican  Mario Alvarez and Venezuelan  Eligio Colmenares  successfully defended their thesis developed under the leadership of researchers from Center for Research in Mathematical Engineering, CI²MA in the same house of higher learning. With this, the UdeC reached the figure of 41 doctors in that specialty, which is a very important institutional milestone. "This program, created in 1995 as a graduate involving active researchers from the Departamento de Ingeniería Matemática and the Facultad de Ingeniería, favors the approach and mathematical treatment of raised real problems in industry and engineering sciences, with a focus on the development of applied research with a strong interdisciplinary and computational component. We have different sources of income for students: a significant percentage comes from the Ingeniería Civil Matemática of the UdeC, but also get students from other engineering specialties. We also have students who have first had training in mathematics and then do a magister in another home studio before joining our PhD. Moreover, recently it highlighted the great interest of Latin American students in our program, and in particular from several Central American countries. We want to train graduates who are able to participate in interdisciplinary working and research groups, as well as being specialists in the contents that are taught", explains the program director and researcher and deputy director of CI²MA, Raimund Bürger. In the case of Mario Alvarez, directed by Gabriel Gatica and Ricardo Ruiz-Baier (University of Oxford, UK), his thesis realized the results of the research entitled: Mixed Finite Element Methods For Coupled Problems In Fluid Mechanics . "We addressed a number of described mathematical models by partial differential equations, which have a significant interest in the field of fluid mechanics and, more specifically, related phenomena particle transport low concentration through viscous fluids in porous media . Among the contributions of this thesis, it is important to note that apart from deducting new mixed finite element methods for each of the models considered, we have been able to develop, in each case, a general abstract theoretical framework through which the solubility of the problem and the stability of the corresponding discrete scheme, thus ensuring the proper functioning of our methods is guaranteed. Moreover, the contributions of this thesis have been reflected through articles published in different ISI journals high impact in the area of Numerical Analysis, Mathematical Modeling and Computational Methods in Engineering. I want to add that in addition to all the previous achievement, and thanks to the guidance of my mentors and support of the REDOC.CTA, CONICYT scholarship and Management Postgraduate UdeC, I had the opportunity to conduct research during two stints the development of the thesis; one at the Institute of Earth Sciences, Université de Lausanne, Switzerland, and other recently at the Mathematical Institute, Oxford University, England, both under the tutelage of Ricardo Ruiz-Baier. This represented a great opportunity for me to expand my vision as a researcher, and also allowed me to participate in internationally renowned events like the momas '14 Conference and MAFELAP 2016," notes Alvarez, who will soon return to his homeland to rejoin as academic in the Sección de Matemática, of the Universidad de Costa Rica (UCR). "Once resumed my work of teaching and research at UCR, one of the objectives is to maintain academic ties with my tutors and researchers continue to work with CI²MA, in particular want to give continuity to the work remaining outstanding thesis.", explains the researcher who became a PhD student at the center in March 2013, through funding for two years by the institutional scholarship REDOC.CTA, the which also he covered the costs of their stay in Lausanne, Switzerland. " For the next two years PhD (2015 and 2016) could adjudicarme CONICYT scholarship, which particularly supported my research stay at the Mathematical Institute, University of Oxford, England, which was also partially funded by the Dirección de Postgrado of the UdeC", explains Alvarez.

For his part, Ricardo Ruiz-Baier, co-director of the Mario thesis, explains: "In my doctoral thesis, conducted under the direction of Raimund Bürger, addressing various problems of sedimentation, several of which form the basis of the main model studied in Mario's thesis. It is a problem with equations coupled flow and transport equations as two elements that interact in the same domain. One of the classic examples for this is the sedimentation, but then we realized that the same research framework can be used for many other applications. The intention was to incorporate the results of my thesis, elements of finite element analysis and mixed methods, in which Gabriel Gatica has a lot of experience, with the purpose of attacking this problem from another angle, that is what finally proposed to Mario. It was a very enriching experience for all of us, especially since this work represents a milestone for the type of thesis that had usually done in the PhD program, most of them related to isolated, specific problems happening now to a problem that incorporated a coupling of various physical phenomena at once and also providing hard EDP Analysis tools to address physical interactions of different types, which requires a much more demanding job", says academician of the prestigious U. of Oxford.

On the other hand, Eligio Colmenares, directed by Gabriel Gatica and Ricardo Oyarzúa, presented the thesis: Mixed Finite Element Methods For The Stationary Boussinesq Problem, which addressed "the problem of Boussinesq stationary given by a system of partial differential equations constituted by the Navier-Stokes equations and the advection-diffusion nonlinearly coupled through buoyancy forces and heat transfer by convection" explains Colmenares. Regarding applications developed model, Colmenares explains that "this describes the phenomenon of natural convection, which is very common in nature, and whose study plays an important role in various applied sciences such as oceanography and geophysics, and also it has important practical applications in engineering such as engine cooling and nuclear reactors, design thermoregulation components for electrical and electronic devices, among many other examples . Motivated by the above, our goal was to provide numerical techniques to describe and quantify not only the inherent key variables such phenomenon, such as speed, pressure and temperature of the fluid, but also other variables of physical interest as the tensor pseudo-efforts, vorticity and velocity gradients and temperature. For this purpose, first we established an appropriate mathematical framework for formulating equivalently the problem and to analyze it, and then we build solutions appropriate to approximate numerical techniques. We show theoretically why these techniques worked, under what conditions, how precisely did; and verified through numerical simulations in two and three spatial dimensions. In addition, we build adaptive algorithms to strengthen the robustness of the most reliable and computationally efficient techniques making". Similar to the case of Mario manner Colmenares research led to the production of five articles , four of which are already published or accepted in international journals in the field of numerical analysis, and the other is subjected.

As for the near future, Colmenares continue to be linked to the university teaching and research frontier. "I recently obtained an academic position as assistant professor in the Departamento de Ciencias Básicas at the Universidad del Bio-Bio, so right now I'm combining the things I generate job satisfaction are teaching and interact with students as well as continue to conduct research, which interests me greatly. In particular, and am working on several projects that have emerged as a natural continuation of my PhD thesis and also involving the participation of other collaborators at national and international level", explains Colmenares. Regarding the origin of the research topic, her co-tutor, Ricardo Oyarzúa says that he himself, in a postdoc he did in Canada, working on the problem of Boussinesq, but with other finite element methods. "I was interested in working with the Navier-Stokes equations and concurred that, in parallel, I care a new method, and in turn Gabriel Gatica raised me the possibility to find a topic of common interest to assign it to Eligio. Thus the co-direction of his thesis gesture, thanks to which very good results that gave rise to several already published or sent items were achieved. In fact, Eligio is hard working and has a natural inclination to persevere and achieve the expected results. For research stay I had to perform as part of their training, Gabriel proposed to do at the University of Pittsburgh, United States, with researcher Michael Neilan, who also works in nonlinear problems. Currently, we are concluding a pending job, and thinking of extending our methods and results similar problems in biology", describe Oyarzúa on potential future research with Colmenares, whose PhD studies were financed entirely by funds from the scholarship program Conicyt for foreign PhD students.

A high valuation of the works presented had to turn Professor Nelson Moraga, from Universidad de La Serena, who was part of the evaluation committee examining Mario and also attended the presentation of Eligio. "The text of the Mario thesis was very well written and is quite impressive that for each chapter, has been able to produce a publication. It is generally expected that a PhD student, produces one or two items, and both Mario and Eligio were at least five each. In addition, it is remarkable how little slow to get their PhD. The level of the thesis also is outstanding, while European and Asian scholars that put assessed well above the average of the top twenty universities in the United States. I also caught my attention the presence of students in the room, because it must have been very motivating for them. All this shows that, when the program is serving 21 years, things are doing very well, the staff is very high and that is expressed in the high level of the theses that were presented today", says the academic.

Finally, Gatica, who directed both graduates, fully agrees with Moraga and confesses that: "While I was thinking the words for the respective toast at the cocktail party, I suddenly realized that our program had reached its majority in March. 2016, which led me to say at that time that this maturity was totally consistent with the quality of the theses that have been developing since a time to this part, among which certainly those of Mario and Eligio". Moreover, Gatica adds: "that while conducting several doctoral theses simultaneously is a very demanding task, in the particular case of these students, this was facilitated by the excellent preparation and great capacity of both, and by the fact that both the abstract tools and theories used, such as the logical sequences that emerged in the derivation of the various results, presented some similarities. Finally, and in retrospect, I think there are plenty of reasons to be proud of what has been achieved with our PhD program during the last decade, a large part of which is undoubtedly due to the work of excellence carried out by its Director, Raimund Bürger".