11 January 2017: CI²MA member carries out research stay in Sweden
During his trip, Julio Careaga also visited the U. of Oxford in England.

Two full months, he was in the European continent, the research assistant of the Center for Research in Mathematical Engineering, CI²MA, from Universidad de Concepción, Julio Careaga, who obtained his Civil Engineering Mathematics degree in 2016, under the thesis Modeling Mathematical and numerical simulation of settlers with variable area in sewage treatment plants (PTAS), conducted under the direction of the researcher and sub-director of said Center, Professor Raimund Bürger. Since then to date, Careaga has collaborated in different works with Professor Bürger himself and also with the academic Stefan Diehl, who was precisely the researcher Careaga visited in the recent stay at the Lund University that extended from November 02 through December 30, and which was financed by the joint basal project of CI²MA and the CMM of the U. de Chile, in addition to own contributions from the Swedish study house in relation to accommodation. 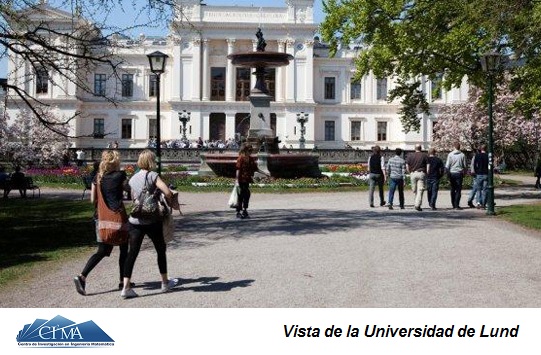 This stay is a continuation of the work that Careaga has already been doing with Professor Diehl and motivated another previous visit that was registered in May 2016. "Now we were working on a new research project and we focused on obtaining and contrasting the Results with experimental data. This time we approached an inverse problem that arose from the results of the previous research, an advance of which, I had reached to present in the Seminar of Numerical Analysis and Mathematical Modeling. In Sweden, the advantage was that he could work directly with Professor Diehl, without the problems generated by long distance communications, in addition to the time difference. We worked with the experimental data that we had and that were scarce, since in the bibliography there is little information on these subjects, related to the sedimentation in conical and non-cylindrical ponds, of which there is more data. Even so, we managed to use the scarce information to apply our method of identification of flow function which allows in conjunction with the numerical approximations to perform simulations from experimental data of the specific process for each sedimentation plant", describes Careaga on the work which allowed them to produce an article that is currently under revision for publication and which has the co-authorship of it, in addition to Professors Diehl and Bürger. Regarding the applications of these results, Careaga points out that processes in sewage treatment, mining and in the food industry, for example, stand out.

Between the activities that Careaga realized during his stay in Europe, it emphasizes the visit that made in early December to the collaborator of CI²MA, Ricardo Ruiz-Baier, who at the moment works like academic of the University of Oxford in England. During this brief stay, Careaga gave a talk and explored with Professor Ruiz-Baier the possibility of carrying out some future joint research, which could also count on the collaboration of Professor Diehl. "This visit to Oxford was at the invitation of Ricardo, because he works in collaboration with Professor Bürger, who was his doctoral thesis director at CI²MA, in addition, so we look for what topic we could develop together to generate an article, addressing some problem that motivates us all", explains Careaga.