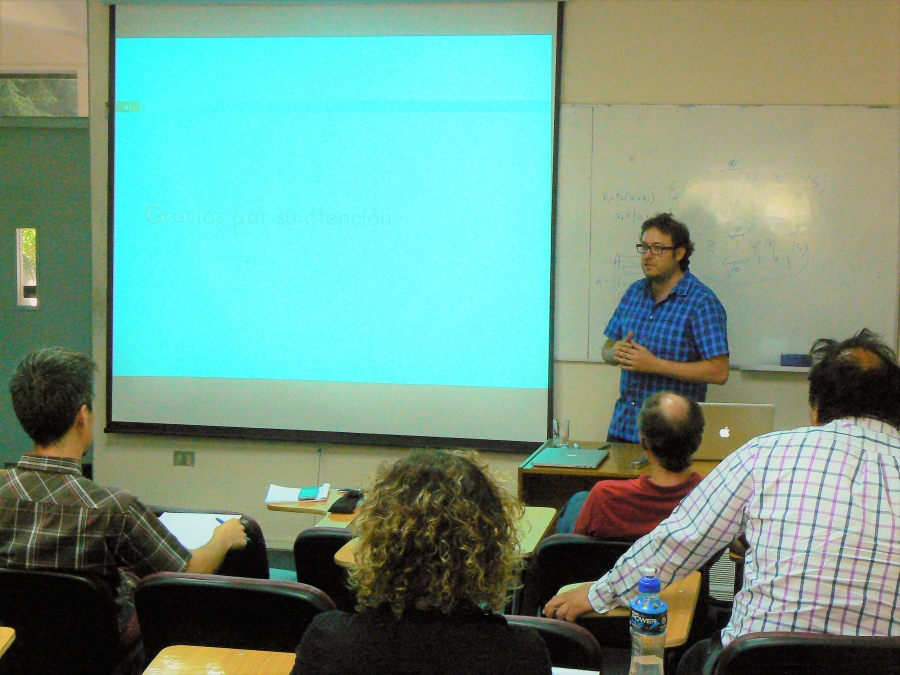 The 12th CI²MA Focus Seminar , named “Recent Advances in Statistical Modeling and Computational Methods”, was held last tuesday and it brought together researchers from different specialties, research centers and universities, at an event organized by theCenter for Research in Mathematical Engineering, CI²MA, researcher and academic of the Departamento de Estadística of the Universidad de Concepción, Mauricio Castro. "The objective was to present the latest advances in statistical modeling field, in general terms. Despite the diverse nature of the presented talks, they all have a common thread that is the search of how to model a statistical problem through a computational method, in very specific and applied topics. Each of the researchers talked about their own experience, giving details of their latest published scientific papers. All of them are people who are very active in research in different disciplines. In addition, Garritt Page visited us from the United States in the context of the international cooperation of a Fondecyt project (N°1130233), of which I am the principal researcher", said the academic who organized this activity, which included five papers on different perspectives about how fundamental is the use of statistics, modeling and computational methods in various areas of scientific research, and how this enriches the results of the academic studies that contribute to solving these problems.

From the Departamento de Estadística of the Pontificia Universidad Católica, Jorge González presented the talk Statistical Modeling for the Comparison of Test Scores, in which he explained the method known as "equating" and its application in the field of Education. "I presented a study that has to do with statistical modeling of data in standardized tests, in particular the problem of the comparability of scores, which refers to how they can be reported in an appropriate way. Although the methods developed and the examples presented come from the educational field, the methodology is applicable to other types of scores, only by knowing the measurements and their different scales. This is where the equation function is used which generates a mapping of the scale of one measurement to the scale of the other, to make the scores comparable, in equivalence or in scale alignment, as long as both tests measure the same. It is interesting to be able to know aspects of epidemiology, education, health, and biostatistics in the same seminar, since we can take ideas from other areas and apply them to what one is studying", the academician said.

Alejandro Jara, member to the same academic institution as González, gave a talk about his study Regression Modeling of Misclassified Clustered Interval-Censored Data, which was motivated by a research related to oral health. "I presented real and concrete examples that have motivated the development of new statistical methodologies, in the subject of models for time to failure when it is determined with error. A very common example in the medical field is an application motivated by dental data, related to the intention of knowing what are the factors that influence the time it takes a person to produce cavities. I believe that currently the training of professionals is extremely specialized and, in that context, it is fundamental that there are instances like this seminar, where we can learn about different experiences, since they are similar topics and we can take advantage of the developments that have been made in other areas. In addition, multidisciplinary teams can be formed, which allow us to approach increasingly more complex problems that can not be solved from the individual disciplines", said Jara, who also works as Director of Research  and Postgraduate Studies at the Facultad de Matemáticas of the PUC.

Gabriel Arriagada, epidemiology doctor and postdoctoral researcher of the Interdisciplinary Center for Research in Aquaculture, INCAR, of the UdeC, presented Application of Statistical Methods in Epidemiology on modeling the contagion of diseases in the salmon industry lecture. "I explained statistical applications in my area that is epidemiology, through some examples of how linear and other regression models are applied in veterinary problems, in this case in salmon farming and, in particular, with sea lice disease. It is an industry that is relevant for Chile and in which a series of questions arise that are difficult to answer and, with statistics, we have helped a lot, with models that answer these questions in the best way. This can be replicated in other industries, such as chickens or any other that is highly dense in terms of temporal and spatial data. It is very valuable for me to be participating in this seminar because it allows me to present my concerns to the experts who are the statisticians", said Arriagada.

Spatial Product Partition Models is the name of the work presented by Brigham Young University (USA) scholar Garritt Page. "What I presented is rather generic and serves anyone who has spatial data and wants to group them together. I myself am applying them to a database of the Education sector in Santiago. We want to know if there is any spatial dependence, if this is a factor that influences student performance, in SIMCE, for example. People believe, and evidence has also shown that the location of the school, like the commune in which it is, influences the success of the students, since Santiago is very segmented in social classes. However, it is important to help explain why this happens and how schools can group together. In addition, by identifying schools that are effective, you can replicate some practices in the others. Now, if the location is decisive, then it is more difficult, but you can collaborate to design better public policies. With this study we also have temporary data, so you can develop further research on the evolution they have had", said the american researcher.

On the occasion, Guillermo Ferreira, researcher from Departamento de Estadísticas of UdeC, also gave a lecture of a powerful methodology of space-time observation, which he addressed in his work Kalman Filtering for Spatio-Temporal Statistics.