Three students of the PhD program in Applied Sciences with major in Mathematical Engineering of Universidad de Concepción, who carry out their studies at the Center for Research in Mathematical Engineering, CI²MA have obtained funding from the Programa Formación de Capital Humano Avanzado de la Comisión Nacional de Investigación Científica y Tecnológica (Conicyt). This scholarship is a governmental initiative intended to conduct doctoral studies in national territory. Among other benefits, it covers university tuition fees, in addition to a monthly stipend and the payment of operational expenses associated with academic research that students will develop within a maximum period of four years. It also considers the possibility of extending some of these benefits up to six additional months, allowing the students to dedicate time to write the final doctoral thesis manuscript. 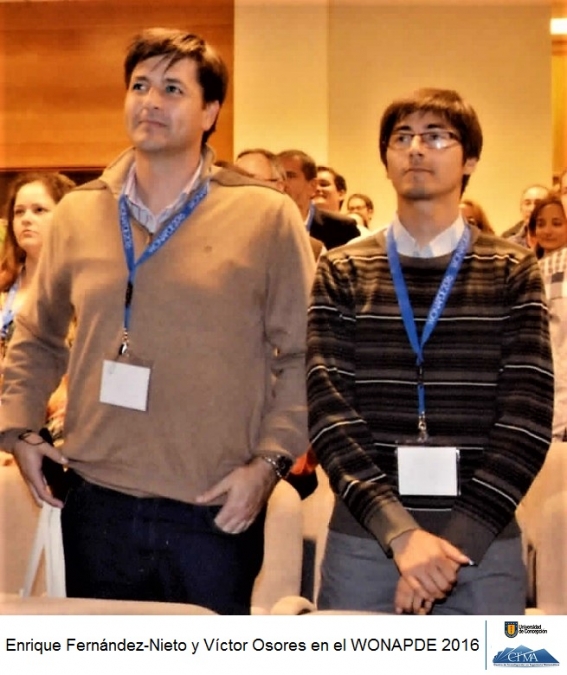 This is the case of Víctor Osores, who is in the third year of this UdeC postgraduate program, and since 2016 has been undergraduate researcher at CI²MA. “This experience allowed me to do an internship at Universidad de Sevilla. Enrique Fernández-Nieto is currently my co-advisor of doctoral thesis, but he previously was tutor of my undergraduate thesis guided by Professor Raimund Bürger”, the mathematical civil engineer UdeC explains. “In the problem we were working on, about polydisperse sedimentation, a formulation appeared strange to me, so Professor Bürger recommended me to work with Professor Fernández-Nieto”, Osores explains about the collaboration he made in the first half of 2014, which culminated with a stay of two months at the U. de Sevilla.

Since then, the collaborative research of Osores with Professors Bürger and Fernández-Nieto has continued during these years and they have developed a project that allowed the student to obtain a scholarship from the Center for Water Resources for Agriculture and Mining, CRHIAM, also at UdeC. “We clarified several points in the research line, and were able to reformulate the first project that became my thesis project”, Osores explains about the research work he defended in August last year. “The topic we were working on in the first instance was high-order methods for hyperbolic problems with non-conservative products, which is the main difference with other problems that are being studied in CI²MA and presents an additional difficulty. First, we worked on high order methods for this type of problem and then, we dealt with polydisperse sedimentation problems on inclined channels. In addition, we tried to slightly modify the model we were using, because it is sort of restrictive regarding the size of the dispersed particles”, Osores specifies about his recent stay in Spain, between October 2016 and January 2017. “I applied to Conicyt scholarship program with the project we are developing now in CI²MA. This is the third time I apply and now I succeeded. This studentship will fund my studies until the end of the program with an extension of one more semester and allows me to focus on research without the pressure of looking for funding every year” Víctor says.

The student from Costa Rica, Bryan Gómez, also obtained funding from Conicyt. Gómez, has recently began his second year in this UdeC Ph.D. program. “I studied Bachelor's Degree in Mathematics Education, at sede Occidente of Universidad de Costa Rica, UCR. In 2012, Professor Gabriel Gatica, director of CI²MA, taught a course there and that’s how I knew about this PhD program. Since then, in addition, the Mathematics group (at UCR) began to create a program in Mathematical Modeling of the UCR, which is closely realated to the research of CI²MA. This doctorate will allow me to put my knowledge into practice in this new program that is being developed in Costa Rica. I have a job commitment to go back there, because they also financially support my stay, which is complemented by the REDOC scholarship from UdeC”, Bryan says.

Regarding his expectations of the work he will develop as a member of CI²MA, Gómez emphasizes “the importance that is given here to Mathematics. I hope to be able to contribute a little to the research that is being developed in this Center, especially knowing that its academic staff is very strong. I hope to be able to develop with Professor Gabriel Gatica all the work that we can, and then return to Costa Rica to contribute in the area, with all the knowledge that I will learn here. Few professors have returned to my country with that knowledge in applied mathematics, and I hope to help to encourage the research in these areas that are really important”, he explains. “In the UCR, a Modeling career is going to open and Mario Álvarez (former CI²MA student) is already teaching courses to undergraduate students He is lecturing about subjects learned here, and beginning to raise the future program, in collaboration with others colleagues who are also studying in other countries such as Mexico, the United States and Brazil. We are going to contribute with our knowledge, because we are all from different areas”, he explains.

Specifically to this public funds awarded, the student emphasizes that “the Conicyt scholarship, in addition to the financial support, it provides the opportunity to do internships abroad and I hope to take advantage of this chance to work with other researchers, collaborators of Professor Gatica, in appropriated topics”, Gómez says. With respect to the learning experience that he has already gained during one year at CI²MA, Gómez emphasizes the fellowship and support he has received from all his classmates. “Here, there are people of different nationalities, not just Chileans, which greatly enriches our experience and, in the future, will facilitate us to make international collaboration”, he says.

The third beneficiary student is Adrian Carrillo, from Cuba, who has just joined the PhD program in recent days. "I've always liked math, but I'm still in love with engineering. Although what I studied in Cuba has more to do with maintenance optimization and scheduling, for example, and is not directly related to the topics studied here, they are the logical continuation for the deepening of the mathematics subjects that I had begun to investigate", Adrián explains about the Master in Mathematical Modelation that few days ago he was performing at the Universidad Tecnológica de La Habana. "That gave me a basis to study what I will see now in CI²MA".

Regarding his choice for this Ph.D. program, Carrillo points out that "I've always had very good references about it, as well as about University, he Faculty and Department, as far as the academic and its publications, I applied to Conicyt because I met another person who had a scholarship from them, in another Ph.D program at UdeC. Obtaining this scholarship also helped me a lot on consular docuements" Regarding his teaching work, Adrián explains that, when he was still developing his last undergraduate courses, in his alma mater he was entrusted to teach some subjects related to mathematics for previous levels students of his own career, Mechanical Engineering. "That's why I took the Master program, so I could study differential equations and statistics, which was the subject I directed my research to, approaching issues of fault analysis, some very stochastic things," he explains. About his application for Conicyt financing, Adrian said that he founded his request in his "motivation for carrying out this program, which will boost the progress of the research I was already developing, that is related to the optimization of problems of transport, fleets, maintenance and scheduling, among others subjects. And one of the challenges that can be posed in this regard are those applied to the mining industry, given the high cost of transportation in that area, it's about seeking a mathematical model that optimizes reliability and maintenance among other issues".