29 May 2017: Doctoral thesis students of CI²MA conducted research stays
Their Conicyt Ph.D. Scholarships funded these stays in Spain and Mexico

Daniel Inzunza and Joaquín Fernández, students of the Ph.D. in Applied Sciences with mayor in Mathematical Engineering of Universidad de Concepción, returned a few days ago from their research stays in Spain and Mexico, respectively. Both are developing their thesis research under the direction and co-direction, respectively, of the researchers of the Center for Research in Mathematical Engineering, CI²MA, Raimund Bürger and Carlos Mora, and their stays were funded by the Conicyt Doctorate Scholarships Program.

Joaquín visited between September 2016 and April of this year, the Center for Research in Mathematics, CIMAT, a governmental entity located in Guanajuato, which belongs to the National Council of Science and Technology of the Mexican government. This research visit was possible thanks to Dr. Rolando Biscay, the thesis director of Fernández, who works in that North American center. “He is a faculty in the Department of Probability and Statistics and has developed previous work with Dr. Carlos Mora from CI²MA", Joaquín explains and adds about the lines of study addressed during his stay that “they are related to numerical methods based on exponential schemes for solution by the Monte Carlo method of the stochastic quantum master equation and the stochastic Schrödinger equation, particularly in cases with jumps. These equations allow the modeling of the evolution of different types of quantum systems allowing, on the one hand to obtain solutions for problems with large dimensions and, on the other hand, to get relevant information from the system that is difficult to obtain with other methods of calculation”. 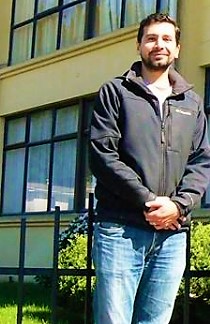 Concerning other activities that he developed during his stay in Mexico, Joaquín emphasized that he attended to several activities organized by CIMAT, such as the VIII School of Probability and Stochastic Processes, the Inference Symposium and Statistical Modeling, the 18th Neuroimaging Meeting and the XV School of Probability and Statistics, and a visit to the Unit of Research in Neurodevelopment Dr. Augusto Fernández Guardiola at the Institute of Neurobiology from Universidad Autónoma de Mexico, UNAM, among other instances. “In addition, I presented the work Numerical solutions of non-linear stochastic Schrödinger equation within the context of the series of Probability and Statistics Seminars, organized by CIMAT", he details.

On the other hand, Daniel Inzunza visited between February and May 2017, the Universitàt de Valencia, where he collaborated with his co-advisor, Dr. Pep Mulet, a professor of the Department of Applied Mathematics of that university. This collaboration was possible thanks to the contacts of Dr. Raimund Bürger, sub-director of CI²MA. “The research line we are developing is related to numerical methods for advection-diffusion-reaction equations, in particular we work with a punctual or specific equation and we want to improve its efficiency by increasing the order of the numerical method”, Inzunza explains about the work he developed in Spain. He also explains “since the equation is quite general, there is a variety of applications, from models of aggregation of individuals of a population to gas dynamics”. Regarding his stay, Inzunza emphasized that “I interacted with most of the professors of the Department, and attended to a couple of talks that were given during my stay”. About the relevance of international collaboration for science development, he said “it is an important part of the work of every researcher, since it allows us to know new techniques and working methods, as well as to generate collaboration networks for future research”.

In agreement with that, Joaquín points out that collaborative work between scientists from different latitudes “allows the exchange and development of new ideas, as well as receiving feedback from work done by other scientists, providing new perspectives and prospects for research projects”.