During the last three days of June, the Ninth Meeting on Numerical Analysis of Partial Differential Equations Santiago Numérico III was held at the San Joaquín Campus at the Pontificia Universidad Católica de Chile. This is the third instance that this meeting is held in the capital of the country. Other versions have been held in Valparaíso, four times, and in La Serena, twice. 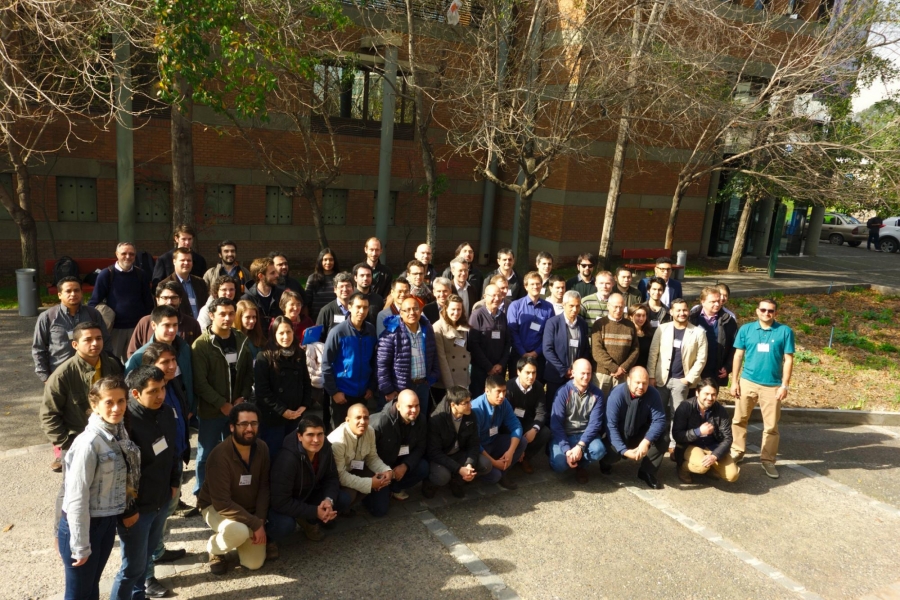 The meeting, which had a great attendance during its three days (about 60 people), considered six plenary conferences by outstanding foreign researchers. Ivan Yotov from the University of Pittsburgh (USA) was one of them, presenting: A nonlinear Biot-Stokes model for the interaction of a non-Newtonian fluid with a poroelastic medium. “I take an excellent opinion of the work being done in the mathematical community of Chile. Previously, I had references from Gabriel Gatica's research and I am fairly familiar with his work and with his group, and I think we have a lot of common research interests, like Stokes-Darcy problems, both in terms of Applications as with the used methods. I hope that the conversations we had during the meeting lead us to generate some instances of collaboration. That gives me a lot of interest”, researcher said.

On the other hand, Serge Nicaise from Université de Valenciennes et du Hainaut Cambrésis (France) presented: The time-harmonic Maxwell equations with impedance boundary conditions topic. “I was impressed by the excellent level of the talks and especially by the level of the Chilean mathematicians in these fields. I know some of them and their work because we have met in other conferences abroad, but I had never been in Chile begore”, he explained.

In turn, Unfitted finite element methods for PDEs on evolving surfaces is the name of the talk given by Maxim A. Olshanskii of the University of Houston (USA). “I think the level of the presentations is consistent with what is expected from those participating in an international conference like this. I believe that the level of presentations made by the students of this meeting is especially good compared to others I have seen at similar conferences in the United States and Europe. They did a great job and I'm surprised. One way to further improve it would be to focus some of the student talks more towards particular applications. The level of mathematics, in general, was very good throughout the meeting”, academician said. The other plenary speakers were Tan Bui-Thanh of the University of Texas at Austin (United States), Erik Burman of University College London (United Kingdom) and Jens Markus Melenk of Vienna University of Technology (Austria).

There were a massive presence of CI²MA members among scientists who presented at the meeting. This was the case of the students of the PhD program in Applied Sciences with major in Mathematical Engineering of UdeC, namely Sergio Caucao (Analysis of an augmented fully-mixed formulation for the nonisothermal Oldroyd–Stokes problem), Paulo Zúñiga (A high order mixed-FEM for the Stokes problem on curved domains), Felipe Lepe (Acoustic interaction between dissipative fluids), Mauricio Munar (A mixed virtual element method for the Navier-Stokes equations) and Víctor Osores (Polydisperse sedimentation in inclined channels); CI²MA ex doctoral students, Mario Álvarez (A posteriori error analysis of a fully-mixed formulation for the Brinkman-Darcy problem), Eligio Colmenares (A posteriori error analyses for augmented mixed formulations of the Boussinesq model) and Filander Sequeira (A mixed virtual element method for a pseudostress-based formulation of linear elasticity); postdoctoral student M. Carmen Martí (A multi-class model for batch settling in WRRFs); and the researchers Raimund Bürger (Approximate Lax-Wendroff discontinuous Galerkin methods for hyperbolic conservation laws), Jessika Camaño (An augmented stress-based mixed finite element method for the Navier-Stokes equations with nonlinear viscosity), Ricardo Oyarzúa (Error analysis of an augmented mixed method for the Navier-Stokes problem with mixed boundary conditions) and Mauricio Sepúlveda (On exponential stability for thermoelastic plates – a comparison of different models).

Santiago Numérico III was funded with contributions from the Center for Mathematical Modeling (CMM) of the University of Chile, the Vice-Presidency of Research and the Faculty of Mathematics of PUC, and the CI²MA from UdeC. The organizing committee was composed by the host Norbert Heuer (PUC), Gabriel Gatica (CI²MA and UdeC), Jessika Camaño (CI²MA and UCSC) and Ricardo Oyarzúa (CI²MA and UBB).

Professor Heuer emphasized the high level of invited speakers and the interaction between them and attendees. “They were really outstanding people in different phases of their careers, and their participation was very important, with excellent presentations of more theoretical sibjects, but with important applications. The guest speakers were available for students throughout the workshop and participated in the discussions of the other presentations. There was a really nice environment of good interaction and rapprochement between all participants”, he said. As for the participation of students as speakers of the meeting, the PUC academician explained that “it is very valuable for all the research activity to have a sustainable effect and not only be developed in a closed circle. It also produces contact opportunities for possible research stays abroad or even doctoral or postdoctoral studies in other countries”. Heuer also highlighted that this kind of meeting allows “international experts to learn about the activities in the numerical analysis that we carry out in Chile. So, they realize that this is a sustainable activity with the participation of many Chilean experts and students. The participants from abroad left with a very positive image regarding our scientific community”, the academic said as a general conclusion of the meeting.

Check the photo gallery in the official website of the meeting.