Between Thursday 17 and Friday 18 August, the first seminar was held at Lund University, Sweden, in the sequence planned by organizers of the Chile-Sweden  international academic collaboration network ACCESS. The event was inaugurated with the presence of the Chilean Ambassador to Sweden and former professor of Universidad de Concepcion, José Goñi, the Rectors of Universidad of Chile, Ennio Vivaldi and the Pontificia Universidad Católica de Chile, Ignacio Sánchez, as well as the President of Lund University, Jonas Hafström.

Among the approximately one hundred assistants, there were two members of the Center for Research in Mathematical Engineering, CI²MA, of  Universidad de Concepción: CI²MA research assistant and current doctoral student of Lund University, Julio Careaga, and the postdoctoral fellow of CI²MA, María Carmen Martí, both invited by the faculty member of Lund University, Stefan Diehl, who in turn has an extensive history of collaboration with researcher and subdirector of CI²MA, Raimund Bürger, which has given rise to 17 co-authored journal publications since 2011 with other ones currently being reviewed, apart from collaborating on the production of other publications and in several research theses of postgraduate students that have been directed by both. Precisely, both Julio Careaga and Maria Carmen Martí were in those days performing a research stay  at Lund University to collaborate with Professor Stefan Diehl. “This was an interesting example to show at the conference” explains Careaga. “In Lund they stood two days, but before, members of the network had visited Stockholm and Uppsala University, which is another participating institution” he adds.

The seminar was attended by academics from different areas of knowledge, who in one part of the meeting were grouped into three working groups: Challenges in the Health of Modern Society, Contemporary Migrations: New Social Challenges and Exploration of the Water-Land Nexus - Energy in which Stefan Diehl, Julio Carega and María Carmen Martí participated. Professor Diehl also made a presentation in which he mentioned the collaborative work he has been developing with UdeC researcher, Raimund Bürger, in addition to Julio Careaga and the student of Doctorate in Applied Sciences with a mention in Mathematical Engineering of UdeC, Camilo Mejías. “We were at the board related to water and energy projects, in which we showed different topics in which each researcher or university could collaborate with others” María Carmen explains.

Careaga adds that “in our group there were many environmental engineers, more dedicated to activities related to planning in the area of ​​water resources I was impressed by an Uppsala professor's presentation on this subject and in energy topics there were professors from the U. of Chile who already had developed some work with Swedish researchers, also related to lithium mining. There was also a Chemistry area researcher from Uppsala who showed us what would be the subjects in which they would be interested in collaborating with Chile, since they did not yet have an established collaboration relationship”. 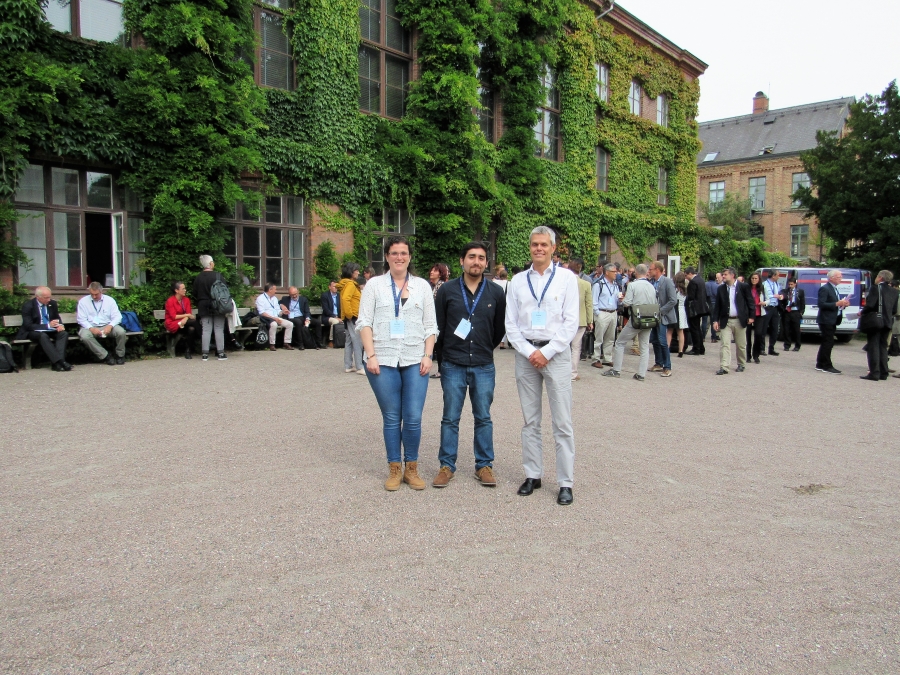 "Even though officially the UdeC is not considered part of this network, there are already tangible examples of collaboration between researchers of our University with Swedish colleagues, given that, in addition to the relationship we have in CI²MA with Professor Diehl, there are other examples such as the case of Olov Sterner of the Chemistry Department, also of Lund, who has a work with people of Civil Engineering of the UdeC, and also has a student of Concepción doing the doctorate under his direction in Lund, funded by Conicyt  Becas Chile program”, Careaga adds.

Although in CI²MA a collaborative relationship has already been established with Swedish researchers, the main objective of the seminar was to begin establishing these links between attendants from both countries, so that part of the program was dedicated to promote the different funding alternatives for scientists available in both Sweden and Chile. “It was during the morning of the first day when the rectors of the PUC, U. of Chile, Upsala and Lund also spoke. In his speech, Lund's representative made direct reference to Professor Diehl's work in collaboration with CI²MA researchers”, Careaga explains. María Carmen Martí said that during the meeting they also addressed other forms of collaboration that allowed them to take advantage of other sources of funding. “They hope to include other universities both in Chile and Sweden, such as the UdeC, and later be able to implement some scholarships and generate resources to continue developing this work. In the few next weeks, Professor Diehl comes to participate in a seminar of CI²MA and we will take advantage of this instance to advance in our work in collaboration” he says.

This visit by Julio Careaga was funded by projects CMM-Basal, Fondecyt 1170473 and Lund University, while María Carmen Martí financed her visit to Sweden using funds from her project Fondecyt Postdoctorado 3150140.