19 August 2017: Members of CI²MA stood out in XXVI COMCA
Massive participation of mathematicians from this UdeC research center

The Congreso de Matemáticas Capricornio (COMCA) has been held since 1991, and this year it met in Arica, at the seat of the Universidad de Tarapacá, whose Department of Mathematics was in charge of organizing the meeting held between the 2nd and the 4th of August. As in every year, COMCA boasted of the participation of outstanding national and international scientists, specialized in the different areas of Mathematics, and it was structured in conferences, invited sessions, courses and poster sessions, thus contributing in promoting the development of this discipline in the country with an added specific emphasis this year on encouraging the participation of national and foreign students, especially from the countries of the Andean Region that includes part of the territories of Argentina, Peru and Bolivia. The COMCA XXVI version was the ideal setting for researchers and students to exchange experiences and knowledge, as well as evaluate potential future collaborations in topics such as Partial Differential Equations; Distribution Theory and Applications; Dynamical Systems; Geometric Control Theory, Optimization; Numerical Analysis of Partial Differential Equations; Matrix Theory, Graphs and Applications; Fuzzy Interval Analysis; Mathematics Education; Ethnomathematics; Mathematical Physics and Stochastic Analysis; Algebra and Number Theory; Geometry and Functional Analysis. 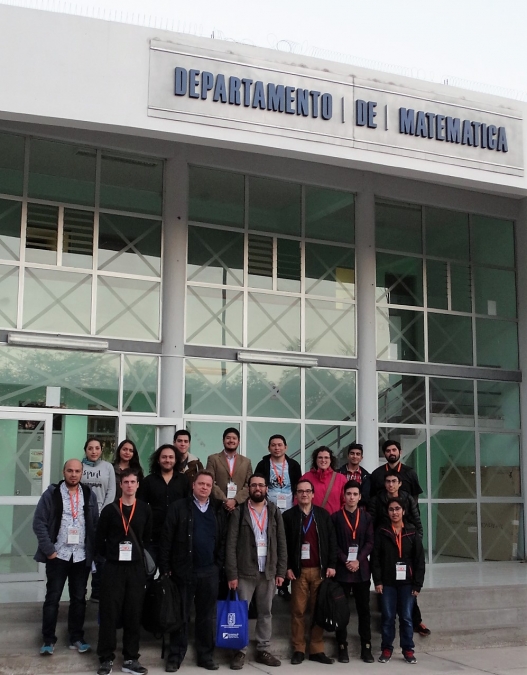 Professor Raimund Bürger gave one of the plenary conferences entitled Entropy solutions and flux indentification for a scalar conservation law modelling sedimentation in cones, in which the researcher and subdirector of CI²MA and also director of the UdeC Doctoral program in Applied Sciences with a minor in Mathematical Engineering, addressed some of the results of a work developed in collaboration with Professor Stefan Diehl from the Center for Mathematical Sciences of the University of Lund, Sweden and his former research assistant and current doctoral student in that prestigious Swedish institution, Julio Careaga. This research has been funded by the Fondecyt Project 1130154, the Basal Project of the Center for Mathematical Modeling (CMM) of the Universidad de Chile, CI²MA, the Center for Water Resources for Agriculture and Mining (CRHIAM) of the Conicyt Fondap Project 15130015 and by the Fondef project ID15I10291. The other plenary speakers were Roberto Cominetti (Universidad Adolfo Ibáñez), Manuel del Pino (Universidad de Chile), Cesar Gutiérrez (Universidad de Valladolid), Charles Johnson (The College of William and Mary), Filidor Vilca Labra (UNICAMP), María Ángeles Rodríguez Bellido (Universidad de Sevilla), Francisco Cordero Osorio (Centro de Investigación y de Estudios Avanzados del Instituto Politécnico Nacional), Adriano da Silva (Universidade Estadual de Campinas), Rodney Carlos Bassanezi (Universidad de Campinas) and Heriberto Román (Universidad de Tarapacá).

In turn, among the fourteen invited sessions included in the meeting, there was the one on Numerical Analysis, coordinated by the researcher of the Center for Research in Mathematical Engineering (CI²MA), Universidad de Concepción (UdeC) and academician from the Department of Applied Mathematics and Physics of the Faculty of Engineering of the Universidad Católica de la Santísima Concepción, Luis Gatica. In it, a large number of members of CI²MA participated, such as the student of Mathematical Civil Engineering of UdeC, Javier Almonacid (A priori error analysis of a mixed-primal formulation for the Boussinesq problem with temperature-dependent viscosity); the students of the UdeC Doctoral program in Applied Sciences with a minor in Mathematical Engineering Mauricio Munar (A mixed virtual element method for a nonlinear Brinkman model of porous media flow), Patrick Vega (A posteriori error estimates for an HDG method for the Stokes problem), Rodrigo Véjar (Study of stability and conservative numerical methods for a high-order nonlinear Schrödinger equation); Professor Raimund Bürger’s postdocs David Zorío (Approximate Lax–Wendroff schemes for hyperbolic conservation laws) and María Carmen Martí (On modelling and numerically solving multi-class batch settling in WRRFs); CI²MA researchers Luis Miguel Villada (On diffusively corrected multispecies kinematic flow models), and Luis Gatica himself (A priori and a posteriori error analysis of a mixed-FEM for the Neumann problem). Natalia Insulza (Convergence of an Implicit-Explicit scheme for a mixed parabolic-hyperbolic system in two dimensions) and Miguel Serón (A nonconforming Raviart–Thomas-based FEM for the stationary Boussinesq problem), both students of the Master in Mathematics with a minor in Applied Mathematics of the Universidad del Bío-Bío, and Pierre Cantin (An edge-based scheme on polyhedral meshes for vector advection-reaction equations), postdoctoral collaborator of Professor Norbert Heuer from the Pontificia Universidad Católica de Chile, also participated in the same session.