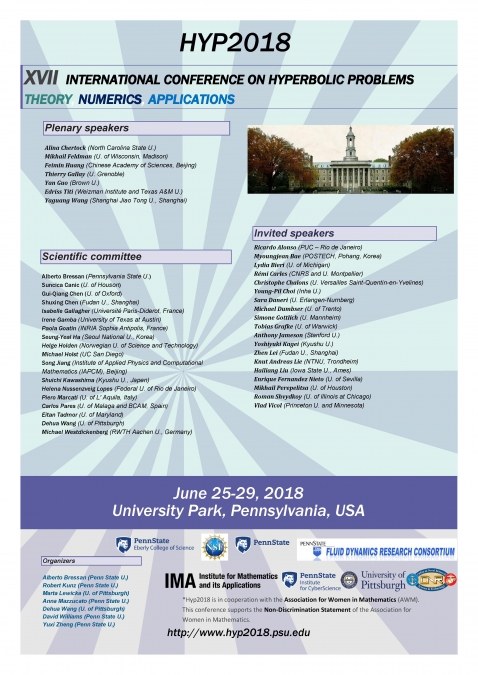 CI²MA had an outstanding presence, through the participation of researchers and students, in the 17th International Conference on Hyperbolic Problems: Theory, Numerics, Applications (HYP2018), held at Penn State University, USA, during June 25 - 29. This series of events, organized every two years at a different place, constitutes one of the most important worldwide meetings on hyperbolic problems, such as conservation laws and related models. CI²MA researchers, Raimund Bürger and Luis Miguel Villada, participated this time with their contributions entitled: "On the efficient computation of smoothness indicators for optimal-order WENO reconstructions" and "High-order numerical schemes for one-dimensional non-local conservation laws", respectively. In turn, the current postdoctoral researcher of CI²MA, David Zorío, presented his work: "WENO reconstructions of unconditionally optimal order", whereas the student of the Ph.D. Program in Applied Sciences with major in Mathematical Engineering, Victor Osores, showed the latest advances of his thesis work through the talk: "An improved polydisperse sedimentation model and multilayer approximation with finite volume methods". Furthermore, presentations by the colleague from UBB, campus Chillán, Anibal Coronel, and his Ph.D. student, Alex Tello, in addition to the graduated from Mathematical Civil Engineering at UdeC, and currently Ph.D. student at University of Lund, Sweden, Julio Careaga, and Professor Sudarshan Kumar Kenettinkara from the IIT center at Guwahati, India, who was postdoctoral researcher of CI²MA between 2014 and 2017, were also given in HYP2018. "It is very satisfactory to note that, at the eaves of our center and local universities, a group of researchers on hyperbolic problems has been already formed, which has gradually become visible and internationally recognized", Bürger remarks regarding this participation in HYP2018. "This success is also due to our network of collaborators in Spain, France, Italy, UK, Sweden and other countries, namely, among them: Christophe Chalons (Versailles, France), Paola Goatin (INRIA, Nice, France) and Enrique Fernández-Nieto (Sevilla, Spain), who equally participated in HYP2018, occasion that was also used to discuss advances in mutual collaborations", Bürger adds.