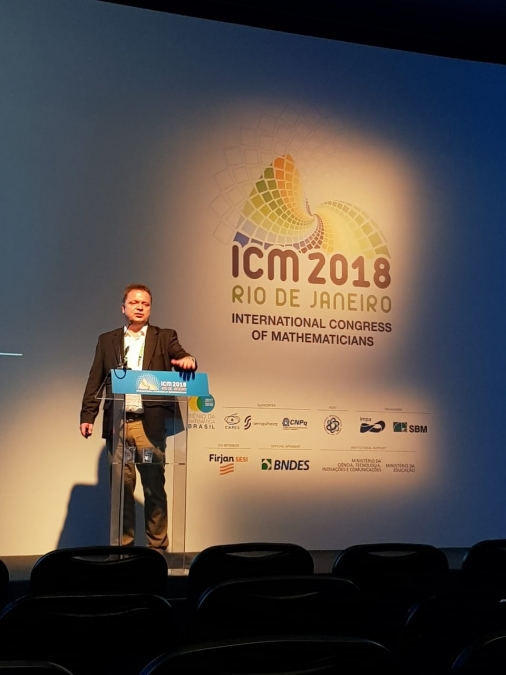 The researcher and Sub-Director of our center, Profesor Dr. Raimund Bürger, participated as invited lecturer at the International Congress of Mathematicians 2018 (ICM2018), the most important worldwide event in Mathematics, which took place in Rio de Janeiro, Brasil, during August 1 – 9, 2018. In his talk, given simultaneously in the sub-plenary sections “Numerical Analysis and Scientific Computing” and “Mathematics in Science and Technology”, and which competed with several others in parallel on entirely different subjects, Bürger had about 100 attendants, all mathematicians from many different countries around the world. In this lecture, entitled: "On convection-diffusion-reaction and transport-flow problems modelling sedimentation", Bürger presented selected advances on the mathematical and numerical analysis of models, expressed by partial differential equations, which describe sedimentation processes with applications in mining and sanitary engineering, specifically in models of thickeners and wastewater treatment plants (WWTPS). The base model is a scalar convection-diffusion equation with strong degeneracy and discontinuous flux. The results presented refer to: a novel mathematical method for identifying a coefficient function from measurements in a cone; the extension of the model to processes of sedimentation with reaction (denitrification process in WWTPS); and the numerical solution of coupled flow-transport problems in two spatial dimensions. The presentation summarized contributions published in journals together with collaborators, among them, Stefan Diehl (Lund University, Sweden) and Ricardo Ruiz-Baier (University of Oxford), and the Ph.D. students Julio Careaga (Lund) and Camilo Mejías (Hibring Ingeniería/UdeC).

Bürger says: “I have considered a great distinction to have been invited to present at the congress. I have received some very positive comments about our work, as well as a suggestion to publish the material as a monograph, an opportunity that I will calmly analyze in the coming weeks. On the other hand, I participated in the opening ceremony in which the Fields medals are awarded, and by invitation in two receptions, organized by the German consulate and the CNRS respectively, in which some of the winners were also present. Although my own line of work is related to very specific applications, of course I have enjoyed sharing with the international mathematical community. Anyway, I am very happy to have been able to represent the level of mathematics in Chile, along with colleagues Andrés Navas (USACH) and Jairo Bochi (PUC) who also participated as invited lecturers. I am also very satisfied of having left in a very high position the name of Universidad de Concepción, the Departamento de Ingeniería Matemática and the Centro de Investigación en Ingeniería Matemática. I am also very thankful by the permanent financial support for my research, which comes from diverse CONICYT programs (CMM-Basal, Fondecyt, Fondap/CRHIAM, Fondef, Anillo), without which I would not have been able to finance my participation in ICM2018."

Regarding how his participation in the ICM2018 originated, Bürger adds: "The invitation to present at ICM2018 came from the president of the organizing committee, Marcelo Viana, in April 2017. The organizers never asked me for a specific topic, but I supposed that the invitation to give a talk on the theme of both sections was related to my work on sedimentation models, an area in which I started working 25 years ago when I began my doctorate studies in Stuttgart, Germany. On the other hand, the invited speakers were asked to contribute a work of about 20 pages to the annals of the congress until the end of November 2017, an opportunity that we took advantage of with the collaborators, and which generated the way how the theme was defined. Finally, I would like to mention that had a preliminary version of my talk, which I presented at the Jornada de Matematica de la Zona Sur in Valdivia, and which was gradually edited after that."