15 May 2019: Collaboration with the Mathematical Institute of Oxford continues
Through the co-direction of theses with Ricardo Ruiz-Baier, graduated from our doctorate 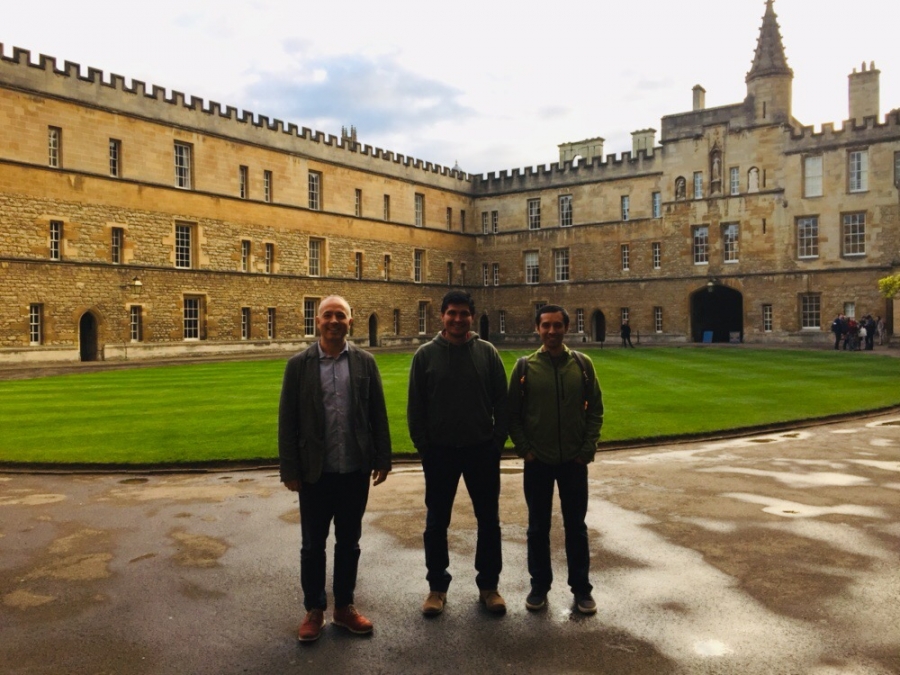 The scientific interaction of the Centro de Investigación en Ingeniería Matemática, CI²MA, with the Mathematical Institute of the University of Oxford, United Kingdom, continues to grow and strengthen, both as a result of collaborative work among researchers, and through the thesis co-direction of the students of our Doctorate Program in Applied Sciences c/m in Mathematical Engineering, and all the above in the area of Numerical Analysis of Partial Differential Equations. The main responsible of both academic aspects is Professor Ricardo Ruiz-Baier, graduated in December 2008 from the aforementioned program. He has been in Oxford, as "Departamental Lecturer", since mid-2015. In addition to continuing joint research with Raimund Bürger, his ex-advisor, Ruiz-Baier has also given himself the time to work in a very productive way with other members of this center, Jessika Camaño, Gabriel Gatica, David Mora and Ricardo Oyarzúa, with former undergraduate students, Javier Almonacid and Julio Careaga, and with graduates of the same doctorate such as Verónica Anaya, Carlos Reales, Héctor Torres and Pablo Venegas.

With regard to the doctoral theses co-directions, the first one, together with Gabriel Gatica, was Mario Álvarez, graduated in 2016. This work gave rise to 6 articles during the thesis period and some more on the way. Part of this collaboration was made during the stays that Alvarez made in Oxford during June-August 2016. Currently, there are two students staying at Oxford, funded by Conicyt's Advanced Human Capital Training Program (PFCHA), Bryan Gómez and Paul Méndez, who are co-directed by Professor Ruiz-Baier in conjunction with Gabriel Gatica and Raimund Burger, respectively. In this regard, Ruiz-Baier points out: "Besides having a time dedicated to advance intensely in their doctoral theses, it is a great opportunity for the students to participate actively in the different academic activities related to topics of interest for the CI²MA. For example, Bryan has been able to follow several specialized courses, including Nonlinear Analysis, and Fixed Point Methods. On the other hand, the Numerical Analysis group in Oxford has two weekly internal seminars, and an additional seminar, dedicated to Computational Mathematics and Applications. Also, Bryan and Paul have participated in the seminars of the Partial Differential Equations group, and the Industrial Mathematics workshops". In addition to these events, "the students have also had several collaborative meetings with other members of the Institute, and have had the opportunity to discuss their research topics in different environments, with top-level scientists. All those activities contribute to the formation and development of their academic profiles as well as to expand the collaborative networks of the PhD program in Applied Sciences c/m in Mathematical Engineering", Ruiz-Baier adds.

For Bryan, it is actually his second visit, the first one being held during January-April 2018, while the current one, which began on February 15, ends in the middle of this month. As for what this international experience has meant for his doctoral training, Bryan, who has already published 3 articles in conjunction with his advisors, points out: "Both, the previous doctoral internship and the current one, have allowed me to know the functioning of top-level universities and institutes in the development of mathematics, in particular Numerical Analysis. Specifically, this internship has allowed me to be a part, as speaker and listener, of the numerous seminars organized by the Numerical Analysis and EDP groups of the Mathematical Institute, in which researchers from all over the world present their most recent works. I have been able to work with my thesis co-tutor and some of his collaborators in various and varied problems that have allowed me to know topics in which I had little experience so far. In this way, I could complement the work I have been doing in my doctoral thesis". In turn, projecting towards the future post-graduation, Bryan states that: "This experience has made me realize that the solid training received during these doctoral studies allows students to have the conditions to seek for postdoctoral positions in diverse areas, and in this way diversify our subjects and academic contacts".

On the other hand, Paul's stay, from May 1 to July 31, 2019, constitutes his first international experience as a doctoral thesis student of Burger and Ruiz-Baier. In this regard, Paul, who already has two articles accepted for publication, both with his advisors, indicates that: "The Ph.D. program in Mathematical Engineering of the Universidad de Concepcion has as one of its strengths the wide network of contacts that its researchers have with other academics around the world. This has allowed me to do a research stay at the University of Oxford, an institution with great recognition at a world level. The internship constitutes a great experience not only from the academic point of view but also for personal development. In addition to the opportunity to work with Ricardo Ruiz-Baier, co-advisor of my thesis project, I want to take advantage of the stay to learn more about the research lines developed by other academics of the Oxford University Mathematical Institute, to know their points of view on subjects that can enrich my research, and to establish contacts with which I can continue working in the future".