7 July 2019: Researcher and student of CI²MA participate in international congress
Work presented by Yolanda Vásquez was recognized as one of the best posters 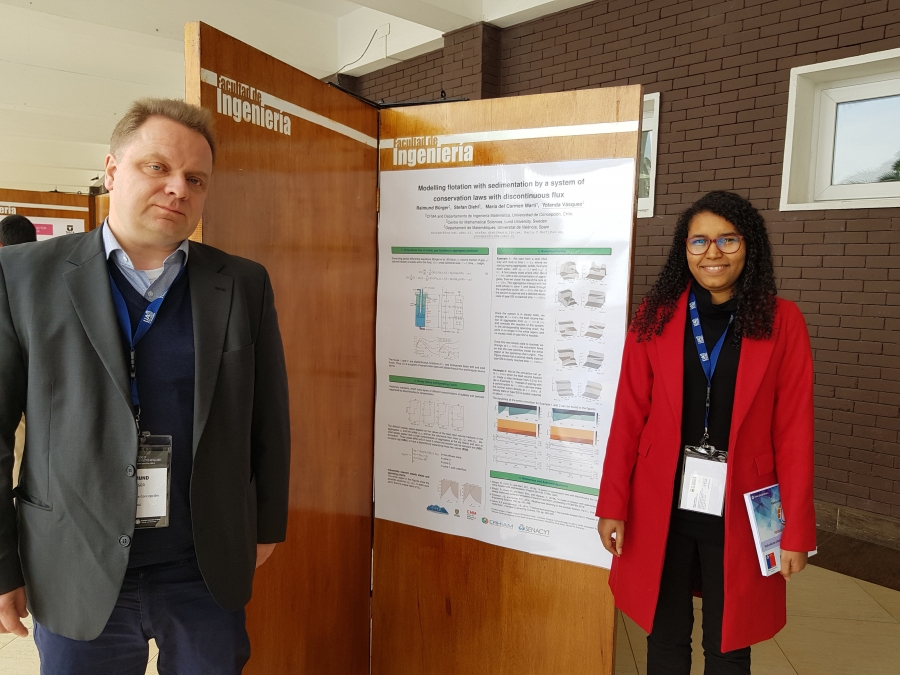 The researcher and Sub-Director of the Research Center in Mathematical Engineering (CI²MA), Raimund Bürger, and the thesis student of the PhD Program in Applied Sciences with major in Mathematical Engineering, Yolanda Vásquez participated in the congress International Conference on Fundamentals of Mineral Processing and Extractive Metallurgy (FoMPEM), held on July 2-4 in Antofagasta, which was organized by the team of Luis A. Cisternas, academic and Director of the Department of Chemical Engineering and Mineral Processes of the Faculty of Engineering of the University of Antofagasta.

The event had about 90 participants, including speakers from the United Kingdom, the United States, Australia and Mexico, besides graduate students from Chile and Latinamerica. Raimund Bürger contributed a talk entitled: "A flotation model with sedimentation: stationary states and numerical simulation of transitory operations", while Vásquez presented the poster entitled: "Modeling the flotation with a system of conservation laws with discontinuous flow". Bürger and Vásquez noticed that their presentations on the advances in flotation modeling were quite successful among the experts worldwide, since they received several positive comments and expressions of interest from the participants. In addition, at the closing ceremony of the event it was informed that the poster of Yolanda was awarded an honorable mention (consisting of a diploma and a gift) among all the posters presented in the corresponding session. It is worth mentioning that Stefan Diehl, from the Center for Mathematical Sciences of the University of Lund, Sweden, and María Carmen Martí, from the Department of Mathematics of the University of Valencia, Spain, are also co-tutors of the thesis work by Yolanda Vásquez. About the event itself, she comments: "Participating in this congress has been an enriching experience, which has allowed me to interact with specialists in flotation and sedimentation processes. Despite being a congress on mining, knowing what happens inside these operation units will benefit the development of my mathematical thesis".

The participation of Bürger and Vásquez in the conference was financed by CRHIAM (center to which Bürger also belongs), project CONICYT / FONDAP / 15130015, and by a partial contribution from the Fondecyt project 1170473 of Bürger. Yolanda's doctoral studies are funded by the Secretariat of Science, Technology and Innovation (SENACYT) of Panama.