Between Tuesday, October 22 and Friday, October 25, the Spring School of Numerical Analysis, EPANUM 2019, was held at the German Sports Club of San Pedro de la Paz, which brought together graduate and postgraduate students from Brazil, Colombia, Costa Rica, Panama, Paraguay, Peru, and Chile. The main goal of EPANUM was to transmit and promote the research work performed by the Group on Numerical Analysis of Partial Differential Equations of the Center for Research in Mathematical Engineering, CI²MA, in which researchers from Universidad de Concepción (UdeC), Universidad del Bío-Bío (UBB) and Universidad Católica de la Santísima Concepción (UCSC) collaborate. 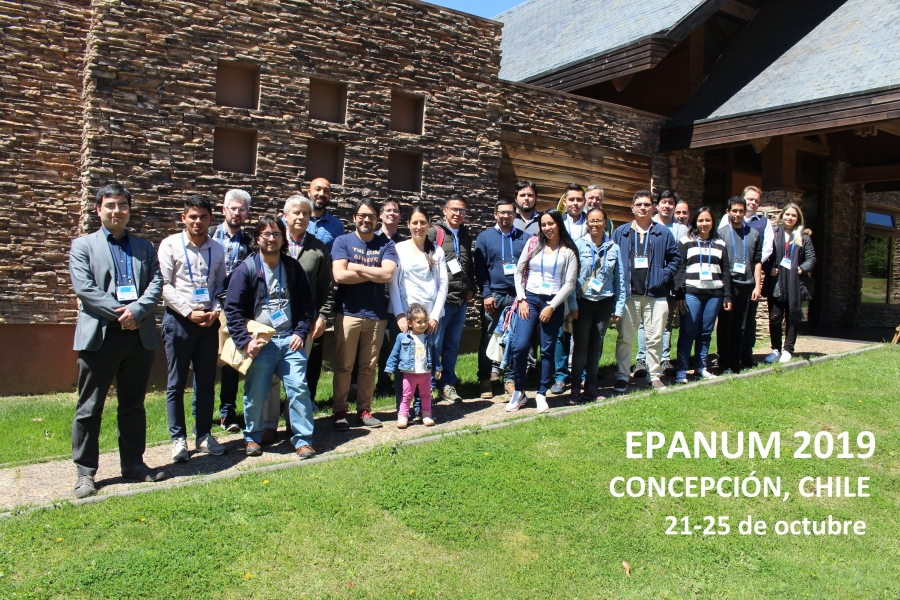 The instance, organized by CI²MA researchers, Leonardo Figueroa and Diego Paredes, was positively valued by the attendees, since it allowed them to know from first-hand the work carried out by the most productive Concepción researchers in this area. “In my faculty I have had classes with Professor Carlos Reales, who graduated from the local Ph.D. program, and keep collaborating with CI²MA. Indeed, he told us that this school would be held and how beneficial it would be for us to participate, and to know about the research in Numerical Analysis that is carried out here. I found very interesting all the lectures and talks that were given. I learned several new things, because each researcher who has presented has different topics and one can learn a lot from them”, Leanis Ortiz said. She is Colombian, and has a degree in Mathematics from the Universidad de Córdoba, located in Montería city, Colombia.

On the other hand, Daniel González, Master (c) in Mechanical Engineering of UdeC, commented that, although the contents of EPANUM are more abstract than those with which he usually works, it was an experience that will allow him better understanding of the studied phenomena. “I have always been very enthusiastic about Mathematics and, although there are many things that we study in my master program, we do not get into the fundamentals. I saw on Facebook the event of this School and I was immediately interested in participating and I am quite happy to have come. In Mechanics we work with finite elements, in problems of elasticity and elastodynamics, for example, but we do not study what is behind, or how the same methods can be used to solve other problems in engineering, so I think that I acquired very good information, which can help me a lot in my area”, he said.

Currently, CI²MA houses the Doctoral Program in Applied Sciences with a minor in Mathematical Engineering from UdeC and the creation of a joint program between the three universities named Doctoral Program in Numerical Analysis and Scientific Computing has been planned. The Director of the CI²MA, Gabriel Gatica highlighted that, “despite the social contingency that we have been living since last week, with all the applaudible facts on the one hand, and the repudiable ones on the other, that it has implied, we have been able to carry out this academic activity of international impact thanks to the dedication and effort of the administrative staff of CI²MA and all the researchers involved, and certainly thanks to the determination and excellent predisposition of the Chilean and foreign students that participated. In turn, I would also like to thank and recognize the significant support of Mr. President, Carlos Saavedra, who, given the obvious doubts that arose at the beginning of the week, did not hesitate to encourage us to persevere in it and to provide the necessary resources to change the venue of the event”.

In EPANUM 2019 short courses were taught by CI²MA researchers on the topics they are currently working on: Mathematical Modeling in Sedimentation by Raimund Bürger (Sub Director of CI²MA and UdeC academician), Functional Analysis Applied to Navier-Stokes Equations by Ricardo Oyarzúa(researcher of CI²MA and academician of UBB), Practical Introduction to Spectral Methods by Leonardo Figueroa (researcher of CI²MA and academician of UdeC), and Introduction to the Finite Element Method by Jéssika Camaño (researcher of CI²MA and academician of UCSC). “The fact that we have managed to congregate participants from no less than seven Latin American countries, reliably illustrates the regional impact that the research in Numerical Analysis has carried out among the three local universities whose researchers participate in the CI²MA. In addition, as a short-term effect, I am glad that several participants have expressed interest in applying to enter the Doctoral Program in Applied Sciences with a minor in Mathematical Engineering” Bürger said.

More information and photos on the School official website.