Between November 5 and 8, funded by the Conicyt Basal Project AFB-17001 and the Millennium Scientific Initiative, Flacam (French Latin-American Conference on New Trend in Applied Mathematics) was held at the Mathematical Modeling Center of the University of Chile, organized in the context of the 80th anniversary of the CNRS (Center National de la Recherche Scientifique), bringing together leading researchers from Chile and abroad, around diverse research topics in this area of ​​knowledge, such as biomathematics, stochastic processes, optimization and algorithms, among others. Among the participants, researchers from the Center for Research in Mathematical Engineering, CI²MA, stood out.

Mauricio Sepúlveda, a CI²MA researcher and academician from the Department of Mathematical Engineering, DIM, of the Universidad de Concepción, participated in the organization of the Numerical Methods for Partial Differential Equations session in which he also presented the talk Stability analysis of the numerical method for damping dispersive equations in which “I presented a problem of evolution with dispersive and dissipative terms that models an equation of a wave propagation in a fluid and the wave propagation in an optical fiber. I studied the first case with Brazilian colleagues and the second case is a problem that Rodrigo Véjar, a PhD student, has addressed. I presented numerical methods that have the characteristic of preserving certain conservation laws of the equation and, by adding a damping term, there is a stability of the solution and a decay of energy and we study that for both models”, the scientist explains. As for the event in general, he states that “despite the social contingency that exists in our country, the organization was successful, and there was a good opportunity to share and exchange new ideas between the different research projects, with very interesting talk on new topics. It was up to me to work on the organization of the session with great help from David Mora and Manuel Solano who also arrange participation by other talkers”. 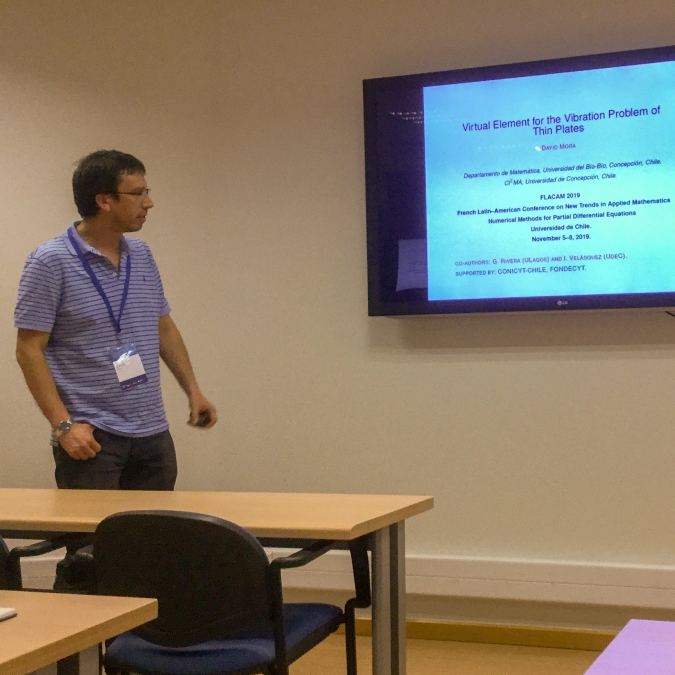 On the other hand, the academician from the Department of Mathematics of the Universidad del Bío-Bío and CI²MA researcher, David Mora presented in this session, his talk Virtual element for the vibration problem of thin plates. “I participated as an organizer of the Numerical Analysis session with Professors Mauricio Sepúlveda and Manuel Solano and also as a talker. My participation was funded by the organization of the event. Due to the contingency, many talkers could not participate and in our session we finally included 14 presentations with national and foreign exhibitors (from France). I can highlight the high level of the works presented in the session, with the latest advances in numerical methods based on DPG, HHO, MHM, FE, DG, HDG and VEM for EDPs”, the UBB academician explained.

In the same session, the DIM-UdeC academician, Rodolfo Araya presented the talk An a posteriori error estimator for MHM Method; while his colleague Diego Paredes, from the same academic faculty, presented the topic New advances on multiscale hybrid-mixed methods, in the Partial Differential Equations session. In the talk “the family of methods is presented, along with a summary of the most recent results from the theoretical and computational point of view”, Paredes explains about his presentation, partially funded by the organization of the event and his Fondecyt project 1181572.

Meanwhile, one of the eight plenary talks of the meeting was given by Raimund Bürger, researcher and Subdirector of CI²MA, who presented the topic On conservation laws and multilayer shallow water systems modeling flotation and sedimentation in which he addressed the theory, numerical methods and applications from two different first-order quasilinear systems of time-dependent PDEs that describe solid-liquid separation processes driven by gravity. Applications of these methods include mineral processing and wastewater treatment, among others. “This presentation is based on a joint work with Stefan Diehl (University of Lund, Sweden), María Carmen Martí (University of Valencia, Spain), Enrique D. Fernández-Nieto (University of Seville, Spain), Yolanda Vásquez (UdeC) and Víctor Osores (UdeC)”, the also academician from DIM-UdeC explains. 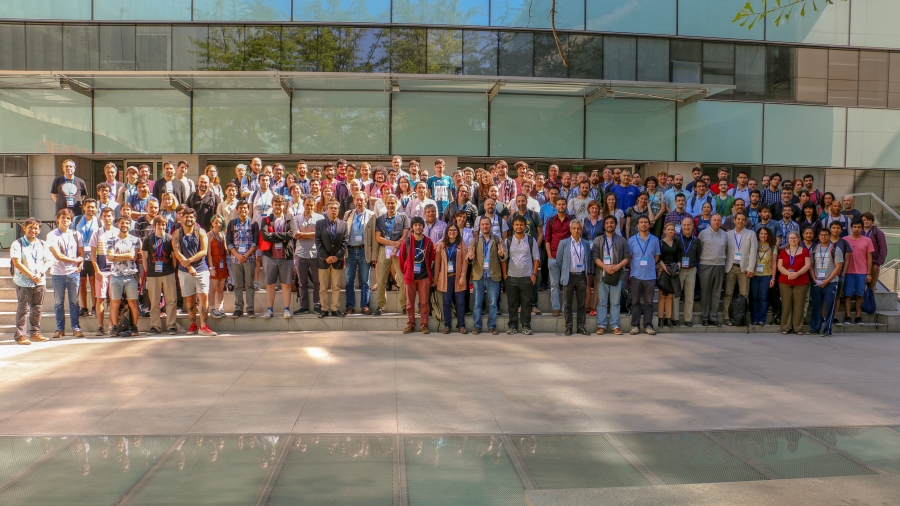