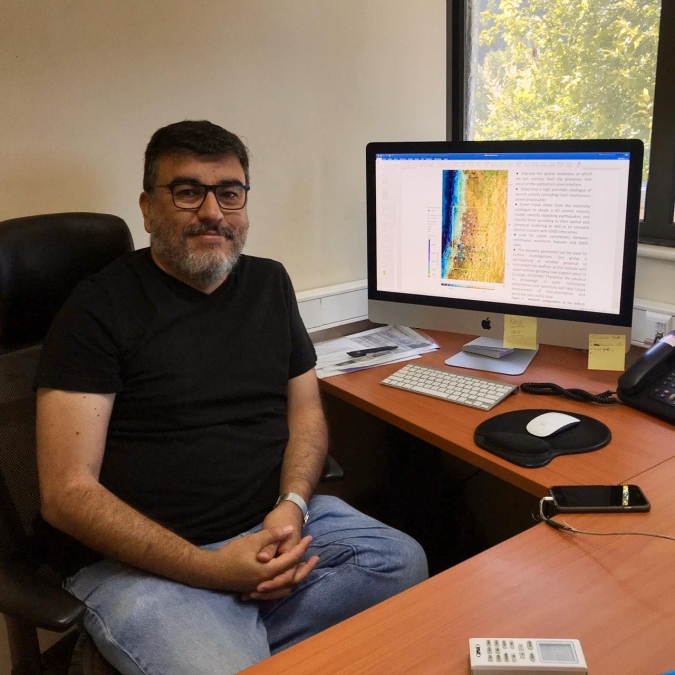 A few days ago, the result of Research Team Projects in Science and Technology 2019 Contest by Conicyt was announced, resulting selected the project Toward understanding transient-to-precursory earthquake deformation in Chile, in which Dr. Rodolfo Araya Durán participates as Assistant Director. He is an associate researcher of the Center for Research in Mathematical Engineering, CI²MA, and Associate Professor at the Department of Mathematical Engineering of the Faculty of Physical and Mathematical SciencesEl estudio of the Universidad de Concepción, UdeC.

The awarded study -led by the academic of the Department of Geophysics of the same academic unit, Marcos Moreno Switt- was selected - in place 6, of 12 approved projects, among 200 postulates nationwide- and El estudioobtained the maximum financing of that state fund source ($ 150 MM), to be implemented over a three years period. In formal terms, the UdeC has the main institution role, and researchers from U. Austral de Chile, U. de Chile and U. Católica de la Santísima Concepción also participate, establishing a robust and interdisciplinary group. “The colleagues are geophysicists and geologists, some with great experience in the field work, in the gathering of the information we will use; others in data debugging and analysis. I am the only one from Mathematics field and my role will be to contribute with modeling through techniques that even some of our students of Mathematical Civil Engineering know. With Marcos Moreno, we have done some work in common, in the way that, through the finite element computational technique, I have developed equations -understood as ways of interpreting reality from the mathematical perspective- that contribute to solutions related to earth's crust displacement”, Araya explains.

The academician details that the study has three main objectives. “The first one has to do with simulation and prediction or with a better understanding of the processes that happen before, during and after an earthquake. And this is achieved through a work, which is observational on one hand, which is to collect data recorded by GPS equipment installed on the terrain, which allow to measure the displacement of the earth's crust and, then, a compilation of these observations and some kind of data analysis must be made”. “My main research line is the Numerical Analysis of Partial Differential Equations, which, in simple terms, is to solve theoretical or practical problems through the use of the computer”, the CI²MA researcher explains. Araya will therefore have the mission to bring the information collected by the project, towards the generation of mathematical models that, in the future, allow bettering understanding these phenomena and, eventually, predicting and preventing seismic movements’ side effects. “The third stage, with the data already recorded and analyzed, is to work on the computational numerical simulation, what is happening on Earth, with the idea of ​​understanding a little better what happens, for example, in a process of subduction of the terrestrial plates, considering phenomena of friction and accumulation and release of energy among others. Sometimes it happens that the earth's crust is moving in one direction and then it changes. Then, this modeling will help us better understand all these mechanical processes”, says Araya. Regarding the positive impact of this project on the experience of UdeC students, Araya emphasizes “the project considers -among its objectives- advanced human resource development, both undergraduate and postgraduate levels. In fact, right now with Marcos Moreno we are beginning to co-direct the thesis of a Mathematical Civil Engineering student. In addition, UdeC geophysicists and geologists are very interested in incorporating more Mathematics content in their training plans, both undergraduate and postgraduate. I myself, I am a professor of the Doctorate in Earth Sciences of Geology, and of the Master in Geophysics, so I am already passing them mathematical modeling courses applied to Earth problems and teaching new techniques that they did not have in their education until now”, Araya explains.

This Conicyt line seeks to promote the scientific and technological development of the country, by financing research projects based on collaborative, broad and multidisciplinary work, which favor the formation of scientific research groups, without any distinction of discipline, and instruction of advanced human resources, among other desired effects. This instrument must generate critical mass within the addressed discipline, allowing it to be developed and that research teams can become Research Centers within the National System of Science and Technology.