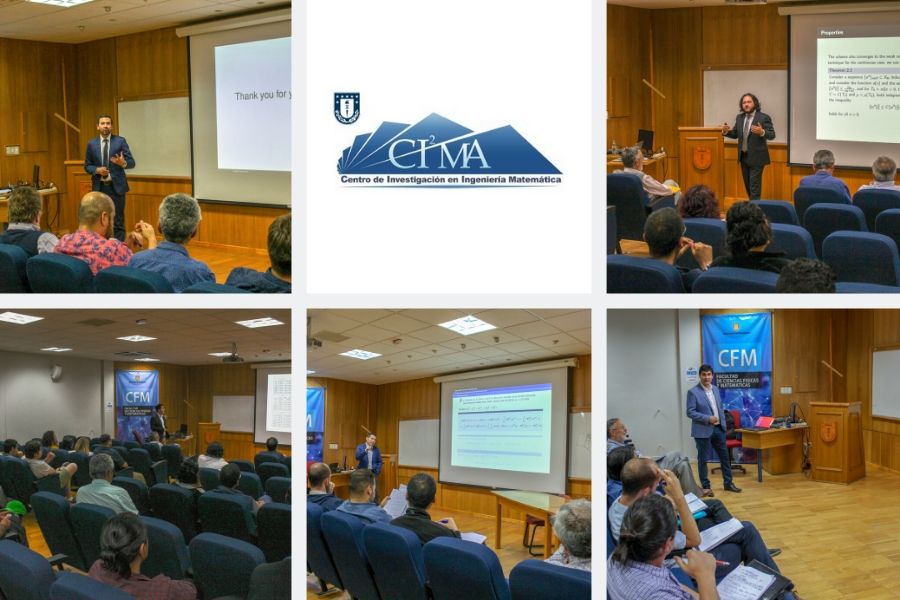 During 2019, Universidad de Concepción, UdeC, graduated eleven new Ph.Ds in Applied Sciences with a minor in Mathematical Engineering. Five of them obtained the highest academic degree within the last month of the year, completing a total of 61 graduates in the whole story of the program. The recently graduated are Daniel Inzunza, Rodrigo Véjar, Paulo Zúñiga, Mauricio Munar, and Bryan Gómez. All of them were guided in the development of their thesis by scientists from the Center for Research in Mathematical Engineering, CI²MA.

On the other hand, Paulo Zúñiga was guided by CI²MA researchers Manuel Solano (Universidad de Concepción), who got his Ph.D. from University of Minnesota, USA, and Ricardo Oyarzúa (Universidad del Bío-Bío), doctorate from UdeC, to carry out the thesis High-Order Mixed Methods in Continuum Mechanics, presented on Tuesday 17. Meanwhile, Colombian Mauricio Munar defended his thesis on Wednesday 18 and Costa Rican Bryan Gomez did the same on Thursday 19. Both were guided by Director of CI²MA, Gabriel Gatica. Munar was co-directed by the Costa Rican academician Filander Sequeira from Universidad Nacional (Costa Rica), also graduated from the UdeC program, and Mixed Virtual Element Methods for Nonlinear Problems in Fluid Mechanics is the name of Munar's thesis. While Mixed Finite Element Methods for Coupled Diffusion Problems in Mechanics is the thesis defended by Gómez, who was co-directed by Ricardo Ruiz-Baier from University of Oxford (United Kingdom), also a graduate from the UdeC PhD program.

“Reaching this number of doctors is something that we never imagined when we started this adventure back in March 1995, achieving the graduation of the first one in March 2000,” Gatica explains and admits that “in addition to Mr. Hubert Mennickent, to whom I have highlighted and recognized on several other occasions, one of the great precursors of this program was Mr. Hermann Alder Weller (RIP) as well, Subdirector of the Department at the time, whom, if I had doubts about the convenience or not of starting with the program having only a couple of academicians involved in research, he repeatedly insisted that that was the time to do it because, in their words: 'Surely on the road the charge will be fixed'. And looking back on everything that we had achieved, there is no doubt that Mr. Alder was absolutely right, and I only regret that he is not here with us today to enjoy what has been achieved thanks to his initiative and conviction. And it is very remarkable that he was not necessarily involved in research and postgraduate duties, but he had it very clear that this was what should be stimulated and encouraged in those years. In other words, he was a great visionary”.

Gatica also emphasizes that the area of ​​specialization that has developed the most in relation to the number of graduates during these 24 years of history, is the so-called Numerical Analysis and Scientific Computing (52), precisely the one in which the eleven graduates during 2019 got specialized, followed very far by Optimization (4), Discrete Mathematics (3) and Stochastic Analysis (2). “This confirms and corroborates the current relevance of a joint doctoral project with the Universidad del Bío-Bío and the Universidad Católica de la Santísima Concepción even more, since, as we have recently reported, a significant number of these theses during the last decade have been co-directed with academicians of those universities”, he details about the initiative to implement the interuniversity postgraduate program called Doctorate in Numerical Analysis and Scientific Computing, which has already been evaluated in the context of the Cruch of Biobío-Ñuble.