21 April 2022: Mathematicians from four universities meet to make agreements at the UdeC
Group formed in Concepción has stood out in recent years as a pole of development of the discipline

This Monday, a meeting was held in the facilities of the Center for Research in Mathematical Engineering, CI²MA, of the Universidad de Concepción, UdeC, between members of the Center for Mathematical Modeling of the U. de Chile (CMM), whom belong to this UdeC, in addition to the U. del Bío-Bío, UBB, and U. Católica de la Santísima Concepción, UCSC. 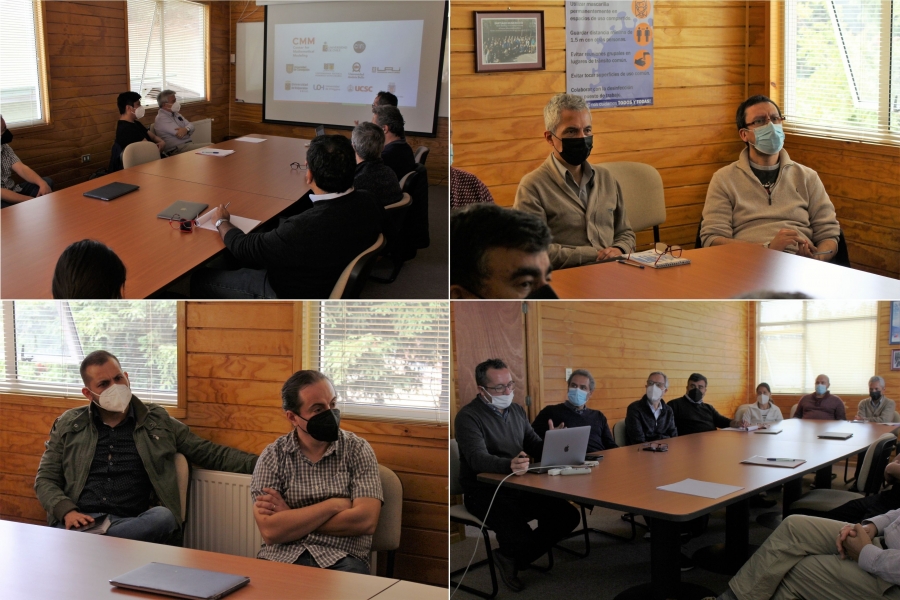 “In this meeting, we were able to find out about the great challenges that this new basal project has, particularly in terms of scientific goals, but also with an emphasis on applications, something that the members of the CI²MA consider very important within our academic task”, Dr. Araya explained.

For instance, Dr. Ramírez explained that “we wanted to meet with the researchers from the Numerical Analysis of PDEs line of the CMM to talk about what our new structure is and what are the commitments we have as ANID Basal Fund, and make them participate, then, in this adventure that is a mixture of commitments and benefits that we have in this new institutionality in which we are seeing the CMM with a strong regional presence and in particular the pole in Ñuble and Biobío”.

For Dr. Ramírez, the group of researchers based in Concepción is “extremely powerful in research and training and that is something we want to maintain and even reinforce. We know the excellence that CI²MA and the CMM researchers have in this line, and what, in part, we also wanted today was to invite these academicians to also get involved in other areas, from the dissemination of science to participation in transfer and innovation projects, supporting emerging groups, which is something they surely do, but it is not seen as a product”.

Since its foundation in 2009, the CI²MA hosts an important activity of inter-institutional collaboration of the three main universities of the current regions of Biobío and Ñuble, promoting a pole of development of the Numerical Analysis of Partial Differential Equations (NA of PDEs), recognized at national and international, being most of these scientists, also level researchers associated of the CMM of the U. de Chile.

“The historical relationship of CMM with CI²MA remains as strong as it has been over the years. A large part of our academic staff is involved in this basal project, so we are sure we will continue to consolidate this special relationship”, Araya detailed.