2 November 2016: Young members of CI²MA presented in seminar on water resources
Graduate students and researchers from CI²MA participated in the CRHIAM congress

The Water Resources Center for Agriculture and Mining, CRHIAM, University of Concepcion, along with Inovagri (Brazil), organized the international conference "Leading Techonologies for Water Management", held between 24 and October 26, And had about 200 exhibitors from different latitudes, all highly specialized researchers in topics such as water treatment, care of the environment, agriculture and the latest technologies that have been developed to address the challenges presented by these issues. In this context, three members of the Center for Research in Mathematical Engineering, CI²MA, UdeC who have participated in studies of modeling and solving problems related to the subject of the congress, were invited to participate, precisely in the first of three Days of the activity. 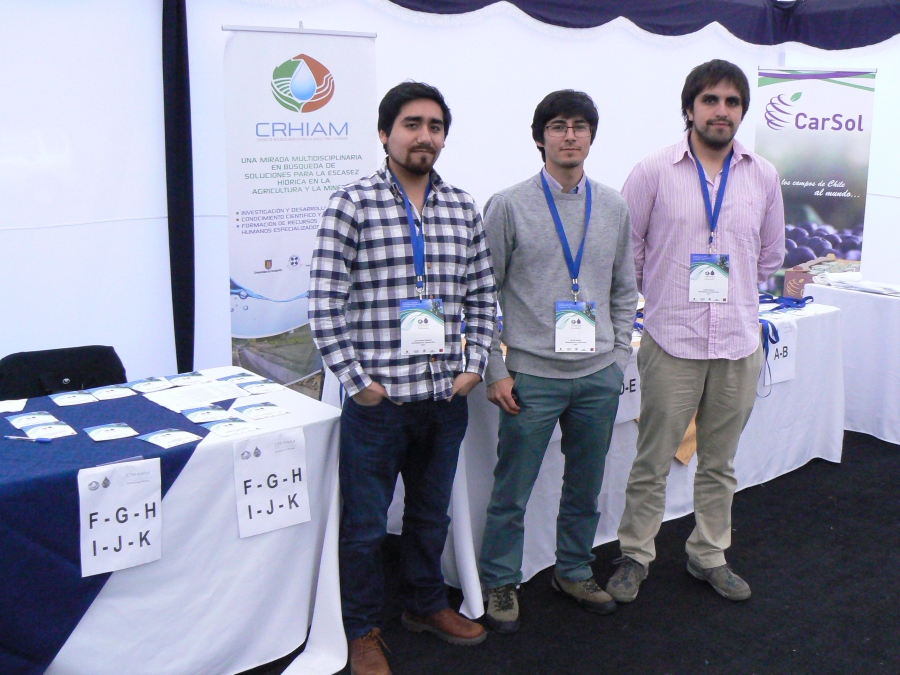 The first was the tesista student of the PhD program in Applied Sciences majoring in Mathematical Engineering, Camilo Mejias, whose research activity is funded by your scholarship Conicyt PhD. The student presented the talk "A model with continous sedimentation WITH COMPRESSION and reaction" in told about his work done with Raimund Bürger, also the CI²MA and Stefan Diehl, University of Lund, Sweden.

"I laid on methods of settling with compression and many in the audience were the metallurgical area, then, did some comparisons of sedimentation processes without reaction in mining and how this can lead to wastewater treatment in sedimentation reaction. At a personal level, the challenge of participating in an activity like this is great, since, although our studies are applied, they are commonly exposed in congresses in our area, so in this case, we have to take everything into a language That everyone can understand. This is positive, also because in this conference there were people doing more experiments theory and are very eager to know the progress there in terms of mathematical modeling, which is rewarding because by working with them, the results are really good", Explained Mejías.

Later it was the turn of his fellow graduate program, Victor Osores, who has financed his doctoral studies with funds from the CRHIAM, the Fondecyt 1130154 project, and the Directorate of Graduate. Doctoral students presented "Multilayer shallow water systems for polydiperse sedimentation: theory, numerics and aplications",the result of work that Professor Bürger also participated, together with the academic Enrique Fernández-Nieto of the University of Seville, Spain.

"In the talk, I presented some of the work we are carrying out with my teachers Raimund Bürger and Enrique Fernandez-Nieto on my thesis project. We are designing high-order numerical methods for a polydispersed sedimentation problem coupled with a shallow water system, and on this occasion, I showed how, from the mass balance and linear momentum equations, we obtain A mathematical model that, under certain conditions, numerically simulates the sedimentation process, for example in rivers. In the event, we have met people from many areas and it was a very good opportunity to meet and interact with other people you deliver knowledge, as does oneself as an exhibitor", says the doctoral student.

Then he presented in July Careaga, research assistant professor Raimund Bürger, who has developed its activities thanks to funding from the CMM-Basal project. At the time, Careaga gave details on a study done by both with Professor Stefan Diehl.

"I exhibited on process simulation continuous sedimentation tanks with variable cross section and an application problem related to the above that has high potential for application in industry, corresponding to the identification of a flow function in the process batch for clarifiers with variable cross section sedimentation "said Careaga, who also highlighted the challenge that meant confronting a heterogeneous audience, which had not only researchers specialized in mathematics."

"The public meeting attendee came from different areas, environmental engineering, chemical, metallurgical, etc. And other countries, mostly Brazil. It is difficult to explain in detail all the mathematical work behind our research without all the nomenclature that characterizes us, and even more in a few minutes, but it is interesting to see that our work is well valued in other areas, which reinforces the importance of performing interdisciplinary work, "he said about his experience in presenting the lecture" Modelling and simulation of continous sedimentation in vessels with varying cross-sectional area."