17 April 2017: European mathematician did a research stay at Concepción
Andrea Cangiani collaborates with researchers and students from CI²MA

A Posteriori Error Estimation and Adaptivity for the Virtual Element Method (VEM) is the title of the talk given at the Universidad del Bío-Bío by Italian researcher Andrea Cangiani, associate professor at the Department of Mathematics at the University of Leicester (United Kingdom), where he has worked for seven years. The event brought together researchers from the Center for Research in Mathematical Engineering, CI²MA , of the Universidad de Concepción, as well as students from the UBB and UdeC postgraduate programs, and was realized in the context of the Seminar of Numerical Analysis and Mathematical Modeling, which is organized by CI²MA researchers Gabriel Gatica, Ricardo Oyarzúa and David Mora. 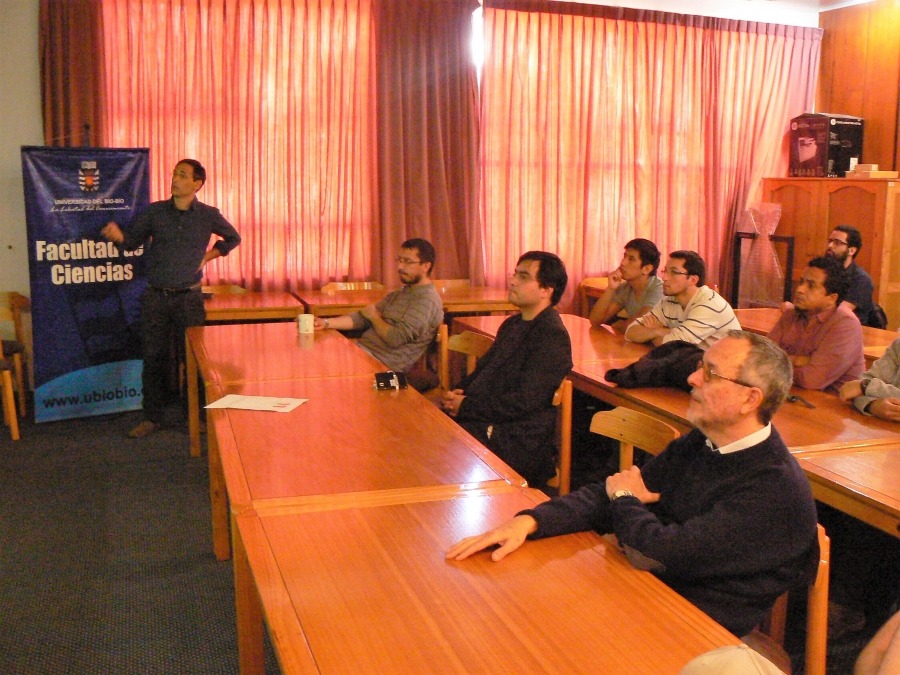 Mora, precisely, has been collaborating for a while with Cangiani on research topics of mutual interest, something that led to a visit by the european academic for three weeks, funded by the Fondecyt project that Mora leads. “We are examining the applicability of the virtual element method to non-standard problems beyond what understanding this method as a variant of the finite element method would entail. We want to give VEM a life of its own, looking for engineering problems in which applying it would be of interest. That is precisely the focus we wanted to give to the stay. We have made progress and we have had a fruitful exchange of ideas, since he has told us about the work that he is doing and we introduced him to things we are working on at Concepción. It is important that more foreign researchers become aware of this and become motivated to come to collaborate with us, visiting other members of our numerical analysis group which, in performance terms, is very comparable with centers in other places of the world”, explains mora about the visit of Cangiani, which was conceived in conversations they held in the context of MAFELAP 2016, although they had already interacted in previous conferences in Europe.

“David invited me here at the Universidad del Bío-Bío in Concepción, because he, as many others here, is an expert on these virtual element methods, which I presented today, and are my main topic of research. And it just happened that Concepción is one of the most important centers in the world doing this type of research. We haven’t collaborated with David in the past, but we started now in this matter of discussing future joint work”, Cangiani explained. “This talk was about a relatively recent technology for numerical solutions of partial differential equations, which was introduced by myself and my co-authors from Pavia University in Italy in 2013. It is a quite novel method to generalize finite elements to deal with more general patches—polygons in two dimensions and polyhedra in 3D—and also to solve more complicated problems with higher continuity requirements. It is a new stream of approaches of which this is probably one of a new wave of numerical methods for partial differential equations. Today I talked about exploiting this flexibility of the subdivisions of space through adaptive methods, 'adaptive' meaning that the computational resources are adapted to the local complexity of the problem, so that with the same computer one can solve bigger or more difficult problems”, the speaker said.

In his talk, Professor Cangiani presented a posteriori error analyses for the Virtual Element Method applied to second order elliptic and parabolic problems. The resulting error estimators are of residual type and are applied on very general polygonal/polyhedral meshes. The estimators are fully computable as they rely only on quantities available from the Virtual Element solution, namely its degrees of freedom and element-wise polynomial projection. The error estimators are used to drive adaptive mesh refinement in a number of test problems, including reaction-diffusion systems relevant to cyclic competition models from mathematical biology. Mesh adaptation is particularly simple to implement since elements with consecutive co-planar edges/faces are allowed and, therefore, locally adapted meshes do not require any local mesh post-processing. The extreme generality of the meshes allowed opens the way to endless possibilities on how one may refine and coarsen them. “The design of adaptive algorithms able to exploit such flexibility is, however, a non-trivial endeavor and something that we have just started to explore”, Cangiani emphasized about this research he is working on with his colleagues Emmanuil Georgoulis, Tristan Pryer and Oliver Sutton.

As a by-product of his stay at UBB, Cangiani visited also the facilities of CI²MA to interact with Gabriel Gatica and his Ph.D. thesis student, Mauricio Munar, who will visit him at Leicester during the second semester of 2017.