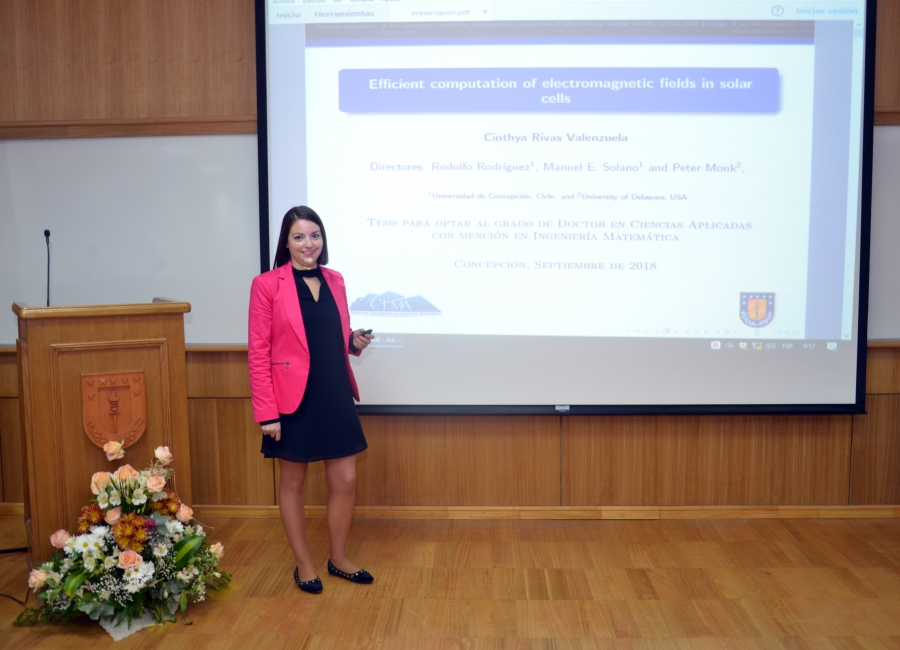 On Wednesday, September 12, Cinthya Rivas became the sixth woman, out of a total of 48 graduates to date, to obtain the academic degree of PhD in Applied Sciences with a mention in Mathematical Engineering from the University of Concepción (UdeC), after having successfully defended her thesis titled: "Efficient calculation of electromagnetic fields in solar cells", which was directed by the researchers of CI²MA, Manuel Solano and Rodolfo Rodríguez, together with Peter Monk (University of Delaware, USA). The Evaluation Commission was also integrated by Carlos Jerez (Pontifical Catholic University of Chile), Jessika Camaño (Catholic University of the Most Holy Conception), and Leonardo Figueroa (University of Concepcion).
In Cinthya's research work, funded by a Conicyt National Doctorate Scholarship obtained in 2012, and which also allowed her to conduct a research stay in the USA with his co-director Peter Monk, new numerical methods were developed to solve equations from the modeling of solar energy collection devices. According to Dr. Rivas and her tutors: "The optimal design of a photovoltaic solar cell requires efficient numerical techniques providing precise approximations of the solutions to the problems of Maxwell or Helmholtz. Our work was based on two techniques: asymptotic models in structures containing thin layers and a Perfectly Matched Layers approach (PML), which allows efficient handling of radiation conditions in the calculation of the electromagnetic field by the finite element method".
Regarding her experience as a doctoral student of the CI²MA, Cinthya comments: "Doing my PhD studies at the CI²MA has been an enriching experience. Although it requires a lot of effort and dedication, to have high-level professors in the area of ​​Numerical Analysis has allowed me to grow as a researcher." In turn, when asked about the meaning of being the sixth graduate woman, she adds: "There has always been a considerable difference in the number of men vs. women who enter the program. While for a few years I was the only woman, now there are two and I hope that this number increases every year and that more women are encouraged to study science careers." Finally, about her professional future, Cinthya says: "Since 2016 I have beeing working as a part-time teacher in the Department of Mathematical Engineering of the Universidad de Concepción. Teaching and motivating new generations of students is something I love, and I would like to continue doing this in the future."
Compartir
Tweet