10 January 2019: Paper of CI²MA researchers among the most cited ones in IMANUM
Work originated from the undergraduate thesis of Ernesto Cáceres

The paper A mixed virtual element method for the pseudostress-velocity formulation of the Stokes problem, originated from Ernesto Cáceres' undergraduate thesis in Mathematical Civil Engineering, co-authored with the Director of the Centro de Investigación en Ingeniería Matemática (CI²MA), Gabriel Gatica, appears as one of the 10 most cited articles in IMA Journal of Numerical Analysis (IMANUM) in the period 2017-2018. IMANUM is one of the most important international journals in the area that publishes original contributions in all fields of numerical analysis, whether in theory, development or use of practical algorithms and interactions between these aspects. 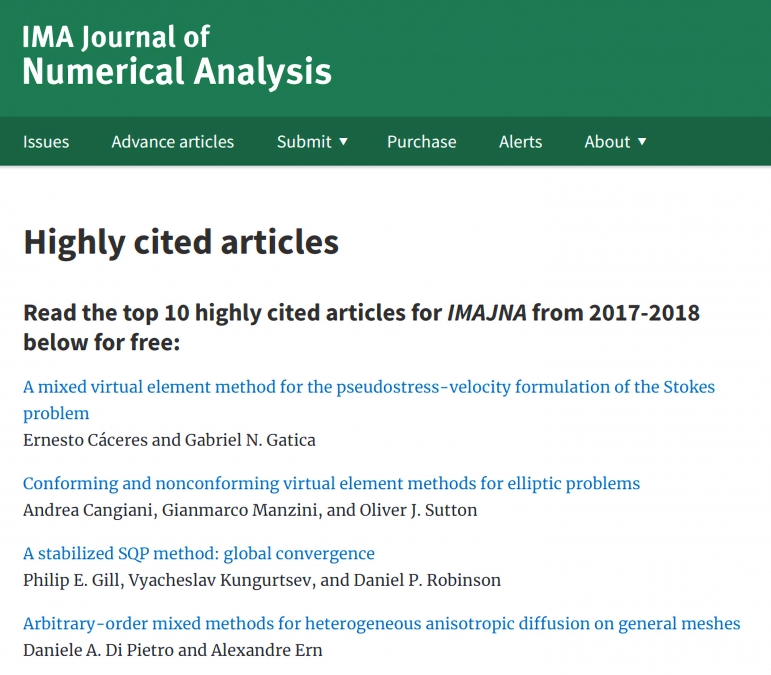 The paper of Cáceres and Gatica corresponds to the development of a numerical method for a known model in Fluid Mechanics called Stokes problem. “This problem has been analyzed repeatedly before, using different methods developed from Numerical Analysis. However, this work provides the first respective analysis by using the Virtual Elements Method, which is a method created about five years ago by important Italian researchers", explains Ernesto Cáceres and adds that the article “allows to lay the foundations to extend the method to more complex problems that have some similarities with the aforementioned Stokes problem or that arise from it".

For the young researcher, who is currently doing his doctoral studies in Applied Mathematics at Brown University, USA, this recognition “means a retribution to the theoretical and practical work that I did during the development of the article, which originated mainly from the motivation to investigate more on the subject dealt with and others similar”. In his opinion, being among the 10 most cited publications during 2017-2018 is a merit that ”is due to everything I learned during my undergraduate studies at UdeC, specifically in terms of the theoretical basis of Numerical Analysis and Mathematical Analysis, and also to the programming skills I acquired in the institution. It is also due, in large part, to Gabriel Gatica, who was professor guide of my undergraduate thesis and also of the respective publication in the IMANUM. His experience as a mathematician and researcher was significant in the development of my thesis”. Ernesto Cáceres is currently in his third year of the doctoral program in Applied Mathematics at Brown University, working under the guidance of Dr. Johnny Guzmán. In this context, it is important to highlight the undergraduate training that he obtained from UdeC, which he qualifies as complete and rigorous, made mostly by important CI²MA researchers, who are internationally recognized for the quality of their work. “I consider this fact to be a key piece in the success of this publication. In particular, CI²MA partially funded this work by allowing me to work as a research assistant for the centre during the development of this project and others that arose as a result of it,"; he says.

The paper, as well as the other 9 more cited, can be reviewed at the following link.