This national congress was held between July 31 and August 2, and included various activities such as conferences, sessions, workshops and poster presentation for students. The congress thematic sessions of the were: Algebra, Numerical Theory and Algebraic Geometry; Fuzzy Mathematical Analysis and Multivocal Dynamics; Didactics of Mathematics; Evolution Equations and Optimal Control; Partial Differential Equations; Mathematical Physics and Stochastic Analysis; Optimization; Numerical Simulation in Problems in Science and Technology; Dynamic systems; Theory of Distributions and Applications; Matrix Theory, Graphs and Applications; and Numerical Analysis of Partial Differential Equations coordinated by the ULS academic Héctor Torres, which had significant participation by members of Center for Research in Mathematical Engineering, CI²MA, from Universidad de Concepción (UdeC). 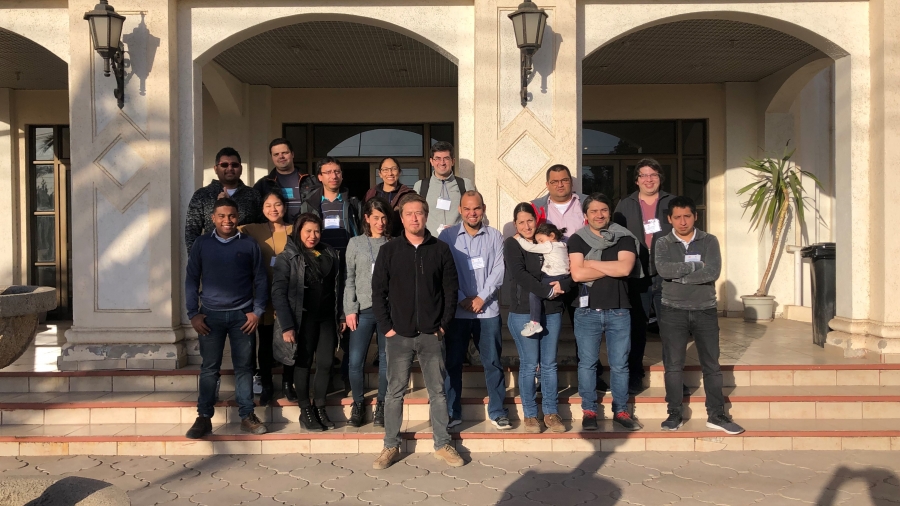 Jéssika Camaño, faculty of the Department of Applied Mathematics and Physics of Universidad Católica de la Santísima Concepción (UCSC), presented the talk Analysis of a momentum conservative mixed-FEM for the stationary Navier-Stokes problem, co-written by her, Carlos García (PUC) and Ricardo Oyarzúa (UBB). “A positive aspect to highlight is the good level of the presented talks, both by professors and students”, the academician says.

On the other hand, David Mora -academician of the Department of Mathematics of the Universidad del Bío-Bío (UBB)- presented the talk “A C^1 Virtual Element Analysis for the Transmission Eigenvalue Problem, which has recently been published, and is part of Iván Velásquez thesis, student of the Doctoral Program in Applied Sciences with a minor in Mathematical Engineering. “I can highlight one of the main advantages of participating in this type of scientific events that is the exchange of ideas that appear during or after the presentations by colleagues and students who participate. Finally, it is worth highlighting the high level of the presented works in the Numerical Analysis session, in particular the talks given by students from PhD and Master's programs from Universidad de Concepción and Universidad del Bío-Bío”.

His UBB colleague Ricardo Oyarzúa presented Error analysis of a conforming four-field formulation in poroelasticity, part of Paulo Zuñiga's thesis, co-directed by him and Manuel Solano. “I would like to highlight the number of students participating in the session (6 of the 13 participants), both from the Magister and the Doctorate programs, and also highlight participation of the three local universities (UdeC, UCSC, UBB) which reaffirms the fruitful academic interaction that has already existed for several years between the three institutions”.

Néstor Sánchez, student of the Doctoral Program in Applied Sciences with a minor in Mathematical Engineering from the UdeC, highlighted the opportunity of being able to participate in the event. “Participating in the conference was a great opportunity for me to communicate the work that is part of my thesis project, in collaboration with my advisor, Dr. Manuel Solano and Dr. Tonatiuh Sánchez-Vizuet from Courant Institute of Mathematical Sciences, New York University. In this paper we analyze a simplified model of the Grad-Shafranov equations that model the electromagnetic field in a nuclear reactor. To solve these equations, a method of Hybridizable Discontinuous Galerkin (HDG) was used in a non-polygonal domain (region of plasma confinement). This congress also allowed me to learn about other work that researchers from UBB, ULS, U. de Valparaíso and UCSC have been doing. I would also like to thank the Graduate School of UdeC for the partial support to attend this event, to Dr. Rodolfo Rodríguez, Director of the Graduate Program, for arranging the traveling support for doctorate students and to Dr. Manuel Solano for partially supporting me through a Fondecyt project”.