14 October 2019: CI²MA student conducts a successful research stay in the US
UdeC PhD candidate collaborates with a GSU researcher

Yissedt Lara, a student of the Doctoral Program in Applied Sciences with a minor in Mathematical Engineering from the Universidad de Concepción, and a member at the Center for Research in Mathematical Engineering, CI²MA, began a stay in September that will last until November at the School of Public Health, Georgia State University, GSU, located in Atlanta, United States, to collaborate with her thesis co-tutor Gerardo Chowell.

“I have planned that during my stay I will work in two parts of my thesis project, one part to finish a study of phenomenological models of growth, which are characterized by being very useful to capture the growth of epidemic outbreaks and their simple description with Ordinary Differential Equations”, Yissedt explains about the objectives of her current stay at the GSU, funded by the Conicyt Advanced Human Capital Formation Program, the second visit she conducts in that university, since she has been there before last during July and August, which was funded by Fondecyt 1170473 project led by CI²MA Sub Director Dr. Raimund Bürger. “For this first stage, we already have a publication entitled Comparative analysis of phenomenological growth models applied to epidemic outbreaks, where we compare four such models using real databases, and with those now, but with synthetic data generated by each of these models, we want to see how well these other models capture these dynamics, a fact with which we seek to define the ‘distance’ between models of this type. With to improve the techniques to generate short or long term forecasts, which are of great interest in of public health”, she details and explains that “the second part consists in the development of a space-time model for a wasp plague, which significantly affects the forests of Chile, in particular those of the Biobío Region”. 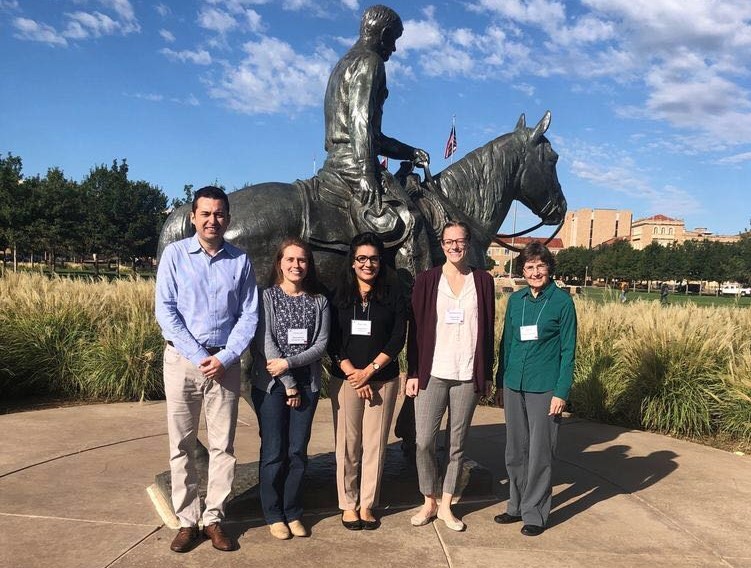 Among the actions of her research stay, Yissedt participated in the event Scientific Computing meets Machine Learning and Life Sciences, organized by Texas Tech University, located in Lubbock, Texas, United States, along with Professor Chowell and other members of his research group. In that occasion, she presented the poster about the article already published. “It has been a great surprise and opportunity, since it allowed me not only to share results and ideas to be developed in my thesis project with the presentation of my poster, but also to be able to get to know several outstanding mathematicians in different applications. For example, Dr. Linda Allen, who formulated the model for the Hanta Virus that Dr. Elvis Gavilán worked on his doctoral thesis at CI²MA, under the guidance of Professors Bürger and Chowell. Another big surprise was to see as a reference in Professor Todd Arbogast's talk a work published by professors Pep Mulet and Antonio Baeza, who work closely with Professor Bürger and with some CI²MA students”, Yissedt details about her participation in that event.

Yissedt obtained her undergraduate degree in the Mathematics program of the Universidad del Valle in Cali, Colombia (2013) and then successfully completed a Mathematics Master's Degree at the Federal University of Paraná, Curitiba, Brazil (2017). Currently, in her doctoral studies at the UdeC, she is developing her thesis Temporary and Spatial Modeling of Infectious Diseases, Invasive Forest Insects and Biological Control under Professors Bürger and Chowell guidance. “It is a work that represents a great theoretical and applied challenge, because we start from real problems, such as diseases and a forest pest spread and biological control”, she explains about her thesis that seeks to address three parallel scientific problems aimed at improving the formulation of models, both theoretical and computational. “If we achieve the projected development in the thesis work, both theoretical and applied contributions would be of great impact, for the improvement in mathematical, computational models, as well as prognosis and prevention”, she emphasizes.