13 December 2019: CI²MA student made a research stay in the USA
Néstor Sánchez developed important advances in his thesis research

“The time I spent at the Courant Institute of Mathematical Sciences of New York University (NYU) was very good because it allowed me to finish the paper A priori and a posteriori error analysis of an unfitted HDG method for semi-linear elliptic problems, which was submitted in collaboration with professors Manuel Solano and Tonatiuh Sánchez-Vizuet. During this visit I was able to present part of this work at the Mid-Atlantic Numerical Analysis Day event, organized by the Department of Mathematical Sciences at Temple University in Philadelphia”. This, in a few words, is how Néstor Sánchez –student of the Doctoral Program in Applied Sciences with a minor in Mathematical Engineering from the Universidad de Concepción, UdeC- describes his recent stay in the United States. “I attended  the event in by the suggestion of Professor Sánchez-Vizuet. It was not an event that had directly to do with my specifics research topics, but it is always interesting to see what other people are working on, and to relate it to our own work. It was a one-day event, but it was a very good experience because of the high level of the speakers, some of them from France, Italy, among others”, Néstor explains about the congress.

Discontinuous Galerkin Methods for Non-Linear Problems in Plasma Physics is the name of the thesis Néstor is developing, under the co-direction by academicians Tonatiuh Sánchez-Vizuet (NYU) and Manuel Solano, researcher at the Center for Research in Mathematical Engineering, CI²MA, and professor at the Department of Mathematical Engineering of the UdeC, who emphasizes that “I started collaborating with Tonatiuh in HDG methods applied to nuclear fusion problems, about two years ago. When Néstor was looking for a thesis topic, I told him what we were working on and he got interested in this type of problems”.

Néstor studied Mathematics at Universidad Nacional Pedro Ruiz Gallo, located in Lambayeque, Peru, and then continued studies in the Master in Applied Mathematics at the Universidad del Bío-Bío in which he was directed by Dr. Ricardo Oyarzúa, also a CI²MA researcher. In 2016, Néstor started his Doctoral lectures he currently follows at UdeC. “The stay in New York was a very positive experience because it allowed me to see what other researchers are working on. Before starting to develop my research thesis, I had already defined its line of research, which is the Finite Elements Method. In the first year of my doctorate studies, Professor Manuel Solano had taught me a subject in Numerical Analysis. I was interested in the works he commented us that he had achieved at research level. When I offered him to be my advisor, he proposed me three topics and one of them immediately interested me. It is related to plasma physics modeling, with released energy control, for example, when the nuclei of a gas collide by being exposed to high temperature”.

In this context, possibility of this stay in NYU arises, given that, as Néstor explains, “Professor Sánchez-Vizuet, who is my thesis co-director, is the specialist in the specific subject of plasma physics. In his university, there is a research department dedicated to this subject. In my thesis, we are working on the Grad-Shafranov equation, which models the balance between certain energies released by a magnetic field that cause a gas to be confined in a certain domain”, the student explains, and adds that Professors Sánchez- VIzuet and Solano had already worked with this equation, but at the numerical level and the scientific challenge they proposed to him in linked to the development of the theoretical part. “The physical training of Professor Sánchez-Vizuet has been helpful in many ways. First, because he has been working in plasma physics for a long time. He has a degree in Physics and postgraduate studies in mathematics, so it is a very good complement to what we want to study. Certain aspects that we, as mathematicians, see at the theoretical level, he helps us deduce in a more applied way. In fact, a basic work that we follow, by Professor Bernardo Cockburn, contains very theoretical assumptions. Professor Sánchez-Vizuet gave us a real interpretation and showed us that they were part of the physical model we were working with”, he details.

In the context of his visit to NYU -partially funded by the Fondecyt project No. 1160320 led by Manuel Solano, by the BASAL AFB 170001 project and by the UdeC Graduate School- Nestor he was able to finish a paper in co-authorship with his thesis directors. “We worked remotely from Concepción, but there was always something we could not solve. We invested a lot of time in that and, with my stay in NYU, we could achieve that progress that was missing. In the second week of the visit we were able to submit the paper, in addition to define our next objectives. In fact, we already have made progress in a second work, which we will surely close in my second visit to NYU that is scheduled for next April. In that visit, we should start working on a third paper”. 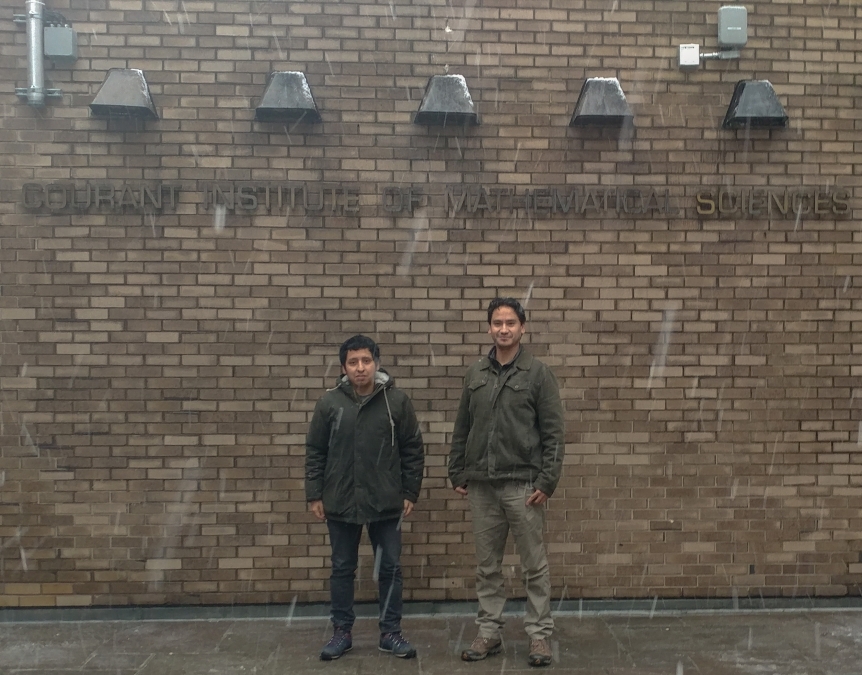