This Friday, May 15, the new Director of the Center for Research in Mathematical Engineering, CI²MA, Dr. Rodolfo Araya Durán, began to exercise his functions. “When one assumes such a responsibility, it is important to highlight that one does not start from zero, and therefore, it is also the time to acknowledge what the Center has achieved so far, under the direction of Professor Gabriel Gatica. Each one will be able to put his own nuance to his management, but if it is possible to advance it is because there has already been previous work and it is appropriate to highlight Professor Gatica's tenacity”, the new Director states. 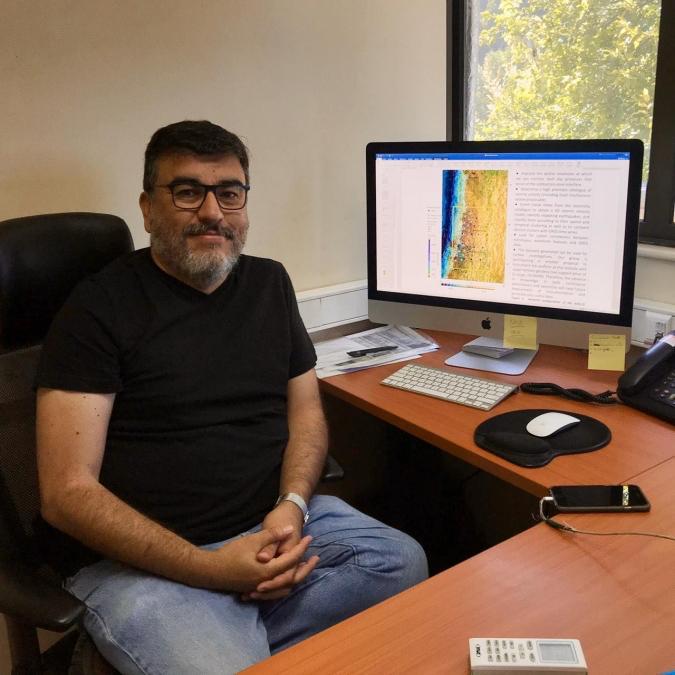 In this same way, Araya explains that "the prestige and position that CI²MA enjoys today are due to the work led by Professor Gatica, who "has also been essential in the development of the Department of Mathematical Engineering of the Universidad de Concepción, and in the training of many academicians, among whom I include myself. The Mathematics of Concepción and of the UdeC, have a lot to thank him for”, he assures.

Professor Araya has a thirty-year career at the Universidad de Concepción, UdeC, an experience that was recently honoured in the context of the activities to commemorate the 101st institutional anniversary. However, his relationship with the campus began even earlier, when in 1981, Araya entered his classrooms to study Bachelor of Mathematics. Over time, Araya would gradually become interested in scientific research, so later on, he would opt for the Master in Mathematics, a challenge that he approached in parallel to his first experiences as a university professor.

At this stage, the incipient researcher decided that the Numerical Analysis of Partial Differential Equations (NA of PDEs) would be his main line of study. "We were even able to achieve a publication in a specialized journal, which at that time was something very rare for a master's study", he explains about the thesis he developed under the direction of Professor Gabriel Gatica, who, for those years, had recently returned to Chile after developing his PhD at the University of Delaware (United States).

After this, Araya was out of the UdeC for a couple of years and returned when the Faculty had already been founded with the organic structure that it preserves until today. Then, the academician reached the category of Assistant Professor and, in 1995, looking for options to continue his academic improvement, Professor Carlos Conca from Universidad de Chile (National Prize for Exact Sciences, 2004), recommended him to the University of Paris VI, and got him in contact with researchers from that university. "At the time, that was the best place to study my specialty because there were many widely prestigious researchers of the area"

After successfully defending his PhD thesis in 2000 and achieving a short stay at the University of Hanover (Germany) in the context of a DAAD program, Professor Araya reach the category of Associate Professor and was elected as Director of the Department of Mathematical Engineering from the UdeC -succeeding Professor Gabriel Gatica- and, later in 2006, as Dean of the Faculty of Physical and Mathematical Sciences, a position he held for three periods and from which, it corresponded to him to participate in the process of design and implementation of the CI²MA. "We passed this project through the Academic Council and the Extended Council of the Faculty until he Center was created", details the researcher who also participated in the original Fondap project, which would give rise to a Basal project, to finally give way to the current CI²MA. "Then, it was opened to external researchers, who were not at the basal project, but have made a great contribution," he explains.

NA of PDEs is the most developed research line within CI²MA, in terms of dedication by researchers and students, development of theses, and publications in specialized journals. "It is a line that, in addition, is quite close to applications, since it addresses equations that normally mobilize physical processes", highlights Araya, who currently, and in the same way, participates as deputy director of an anillo project in the Geophysics field. In this way, Professor Araya foresees a great potential for CI²MA to develop greater interdisciplinary collaboration, both internally at the universities and externally, with companies that need to solve problems that can be addressed from Mathematical Engineering. "While CI²MA is a research center, we can also work on developing applications".  In this way, Araya identifies an opportunity in the more collaborative development between researchers from different Faculties and from the Center.

A more direct relationship with the productive sphere, making known the scientific capabilities of the Center to address diverse problems that may arise, for example, in certain industrial processes, will allow, in Araya's words, “to apply for other classes of projects, and hopefully all the members of the Center, beyond our mathematical projects, we can have a permanent relationship with other disciplines, to grow our field of applications". This, in addition, will enrich the possibilities of topics to be developed by both undergraduate and postgraduate students "also favoring their future work in a more diversified field of action".

Among other objectives that Professor Araya outlines for his management at the CI²MA Directorate, are a more direct and fluid link with researchers and students from the Center for Mathematical Modeling from Universidad de Chile "through joint projects with which we can directly benefit society ”, and “to cultivate the national and international prestige that the Center has achieved thanks to the of worldwide renowned conferences in the area”, the high level of scientific productivity of its members and, eventually, “integrating new people who contribute in this regard", he says.

"We will continue working to finish the construction of the CI²MA auditorium, despite the difficulties that will surely present to us, due to the economic consequences of the pandemic", Professor Araya says.