18 January 2022: CI²MA researchers awarded Fondecyt Regular projects
Academicians from the UdeC and the UBB will lead proposals in the area of numerical analysis that received funding from this ANID line

Three proposals presented by the researchers of the Center for Research in Mathematical Engineering, CI²MA, to the Fund for Scientific and Technological Development, Fondecyt, were selected in the Regular line.

In this regard, the Director of CI²MA, Dr. Rodolfo Araya Durán, highlighted that “in a system as competitive as that of the Fondecyt Regular projects, it is excellent news to have members of our center who were awarded new initiatives. Without a doubt, it is a recognition of the great research work carried out by our researchers. It only remains for me to wish them the greatest success in the development of their respective research projects”. 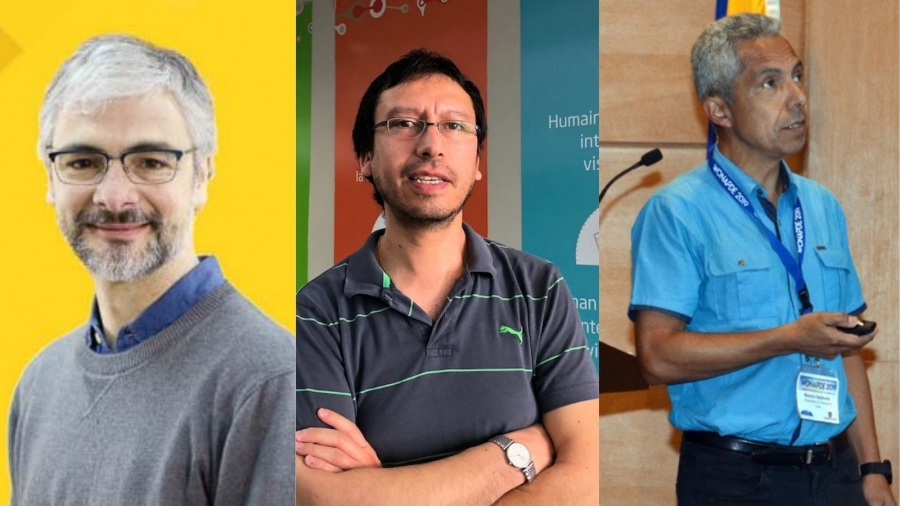 Inverse Problems and Adjoint State Method for Several Nonlinear Evolution Equations is the title of the project led by Dr. Mauricio Sepúlveda Cortés. “It consists of studying several equations in partial derivatives that model some non-linear evolution phenomena and studying the inverse problem, to determine the parameters of the equation from experimentally measured data so that the solution approximates the best possible of said data”, explained the also academician of the Department of Mathematical Engineering of the University of Concepción, UdeC.

“From a theoretical point of view” the expert continues, “this implies studying the existence, uniqueness and stability of the solution of the inverse problem and, in turn, proposing numerical methods to solve it, studying the stability and convergence of said methods”.

“This type of inverse problem and the attached state method is not new, but it is still of great interest, for example, in engineering problems and models such as Fluid Mechanics, and also in Mathematical Biology models”, explained Doctor in Applied Mathematics, a specialist in Numerical Analysis of PDEs, who is currently developing a collaboration with colleagues from France within the framework of the Ecos-ANID C20E03 project, and this Fondecyt Regular project seeks to consolidate previously obtained results and pose new challenges for the limits of the knowledge in this discipline.

“Although the adjoint state method is useful from a practical point of view for solving an inverse problem by, for example, implementing a gradient method and calculating a Lagrangian, this same method can be used to analyze whether the inverse problem is well established and if the numerical approximation is adequate”, Sepúlveda said, about this method that he hopes will have applications in diverse areas such as biology, engineering, ecology and medicine.

Dr. Sepúlveda stressed that this contest is increasingly competitive, since the funds are more or less the same several years ago, but more and more researchers are submitting their proposals. “I have had the opportunity to award Fondecyt projects continuously since 1998. This has involved an enormous effort, but it has also been very satisfactory,” he reflected.

Meanwhile, Dr. David Mora Herrera, an academician from the Department of Mathematics of the Faculty of Sciences of the Universidad del Bío-Bío, UBB, leads the proposal Numerical Analysis of Virtual Element Methods for Problems in Solid and Fluid Mechanics.

“We hope to solve certain fluid-structure coupled problems using virtual elements with regularity C^1 or higher. We will work on relaxing certain hypotheses about the meshes that can be used in the discretization of the problem. They are interesting problems that in turn present mathematical challenges that we hope to be able to solve”, explained the expert in NA from EDPs, who obtained the highest academic degree in the PhD. Program in Applied Sciences with a minor in Mathematical Engineering at UdeC.

Finally, the UBB academician stated that “postgraduate students, both master's and doctoral students, are expected to be involved through theses in the area, in addition to international collaboration with stays of foreign collaborators in Chile and vice versa”.

Resources from this state line of funding were also awarded by Dr. Óscar Link Lazo, academician from the Department of Civil Engineering of the Faculty of Engineering of the Universidad de Concepción, who directs the project titled Scour at Bridge Piers in Supercritical Flows.