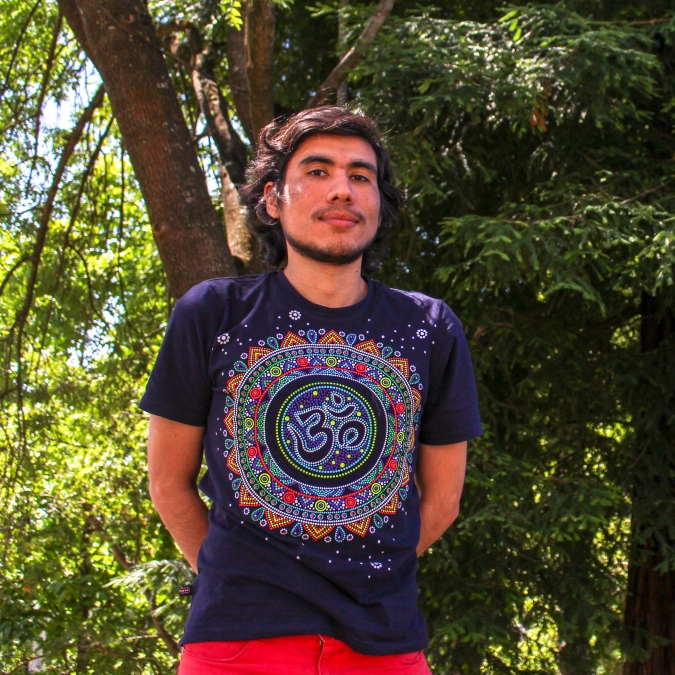 Orthogonal polynomials with invariant weights with respect to reflections is the name of the thesis that Gonzalo Benavides successfully defended a few days ago, to obtain the professional qualification of Mathematical Civil Engineer from the Universidad de Concepción (UdeC). “We study orthogonal polynomials in the unit ball of arbitrary dimension associated with a class of weights invariant with respect to reflections. Depending on the parameters that define the weights, they can have singularities on the spherical cap and/or the Cartesian hyperplanes”, the brand-new engineer explains about the contents of the research. "We obtain approximation properties of the respective L² orthogonal projector, we characterize families of orthogonal Sobolev type polynomials associated with the weight, we obtain connection relations of a specific bivariate base, to later develop computational tools that allow us to easily operate with expanded polynomials in terms of this base. In our work, the so-called Dunkl operators play a fundamental role, replacing in practically every sense the classic partial derivatives”, Benavides points out about the results presented in his examination, which marked an institutional milestone, because, given the situation of social distancing as a result of the health emergency, it was the first to be carried out through a teleconference system in the history of this program and most likely, of the UdeC Faculty of Physical and Mathematical Sciences. “We hope that this work will serve as an archetype for studying the approximation theory associated with weights with interior singularities”, he adds.

Benavides had the direction of the academic from the Center for Research in Mathematical Engineering (CI²MA), Leonardo Figueroa. “The research we carry out lies at the intersection of several topics. One of them is Approximation Theory, a supporter of Numerical Analysis (NA), which indicates how good or bad a specific approximation of a problem is, but unlike AN techniques, it does not tell us about how to get it. They are abstract calculations that do not lead to specific numbers”, the also academic from the Department of Mathematical Engineering at the UdeC explains. “Another topic that intersects and is at the service of NA is that of Orthogonal Polynomials, which are easy to evaluate, integrate and differentiate and are, therefore, very useful for computational manipulation. On the other hand, we study Sobolev spaces, which are function spaces in which, if I manage to state my problems in their terms, give me access to many theorems that are very useful. We dealt with strongly singular approximation problems, with many infinites interacting, so we required very specialized Sobolev spaces”, Figueroa adds.

In the evaluation committee of the thesis examination, in addition to Figueroa, was his colleague from the UdeC and also CI²MA researcher Diego Paredes, and the academic from the Pontifical University of Chile, PUC, Norbert Heuer. “This is an exceptional thesis, with original contributions, both theoretical and computational, in the area of Orthogonal Polynomials. I congratulate Gonzalo and his supervisor for their original results in such a classical discipline. They more than satisfy the level required for an undergraduate thesis", Heuer highlights about the quality of the presented content. In the same way, Figueroa points out that “to all the evaluators it seemed as a very good thesis, a substantial work, of genuine scientific value, and in which the different parts of the work feed each other, conforming a whole”. The academic details that “Gonzalo is an exceptional student, with a well-formed mathematical criterion, which allows him to make decisions that undergaduate students do not usually make, concerning what to do, how to do it and critically judge his own work. Working with him was more like working with a colleague than with a student”, he says.

Regarding his near future, Benavides, who already has two preprints (1, 2), affirms that “in the short term, I intend to continue to be involved in these issues, but slowing down a bit the rhythm and the pressure. In the longer term, I intend to follow PhD studies, preferably abroad”. Finally, the engineer enphasizes “the excellent work experience I had with Professor Leonardo Figueroa. I highlight his constant support, concern, help and the patience he had me. I honestly feel that much of this work does not belong to me, because without the Professor, it would have been impossible for me to tackle many of the problems that arose along the way”.